The series is remembered for a valiant 281 not out by VVS Laxman in the Kolkata Test when he and Rahul Dravid batted for the entire day after follow on was enforced.

Mumbai: Former Australia skipper Ricky Ponting on Wednesday said that the 2001 Test series in India, which was won by the hosts, was one of the most remarkable series that he has ever played in. The 41-year-old right handed batsman walked down the memory lane and talked about the historic 2001 India-Australia series, saying: “2001 series was probably the most remarkable Test series I have played in. We lost the series but the level of cricket that was played and the intensity with which the series was played, the audience in attendance right through the series was unbelievable, ” he said. READ: Ricky Ponting disappointed with Australia’s 0-3 loss to Sri Lanka in Test series

“All finishing off..going to Kolkata… when you ask [commentator] Harsha Bhogale about his most memorable Test match, pretty sure the Kolkata Test will be one right at the top. [VVS) Laxman 280, [Rahul] Dravid 180, after being enforced follow on, India declared a few hundreds in the front and just had over a session to bowl us out and they did.

“It was not our proudest moment, but certainly one of Indian cricket’s proudest moment. Then went on to the third Test [in Chennai], that ended up with India hanging on, to win the series. Remarkable series,” added the 168-Test veteran. Australia had thrashed India by 10 wickets in Mumbai, but the hosts bounced back to win the Kolkata and Chennai Tests to clinch the three-Test rubber 2-1. READ: Ricky Ponting: Mitchell Starc arguably best fast bowler in the world at present

The series is remembered for a valiant 281 not out by Laxman in the Kolkata Test when he and Dravid batted for the entire day after follow-on was enforced. Meanwhile, Ponting said that the upcoming series between South Africa and Australia is going to be a “great” contest as the two cricket powerhouses are fiercely competitive and a delight to watch when they are up against each other. “I mean both [are] quite evenly matched teams right now. Both have got good fast bowling attacks, Mitchel Starc [of Australia] has taken his game to a new level with the red ball. [From] South Africa’s point of view, looks like Dale Steyn is back bowling well again which is great sign.”

“They have still got guys like [Hashim] Amla, [AB] de Villiers, those guys [JP] Duminy in the middle order, they are world-class players,” the Australian great told reporters here at an event organised for tourism promotion in Tasmania. “Whenever Australia and South Africa compete, it is generally a pretty good contest. Australian boys will have to be at the top of the game [and] all and it should be a great series,” the two-time World Cup winning skipper said. READ: Ricky Ponting: Still have nightmares about Harbhajan Singh

South Africa will take on Australia in five One-Day Internationals and three Tests. The first ODI is scheduled on September 30. While the ODIs will be played in South Africa, the Test matches will be organised Down Under at Perth, Hobart and Adelaide. 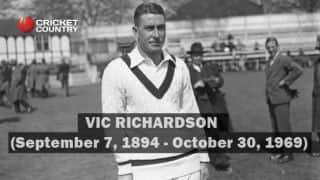 Vic Richardson: 18 things to know about the talented Australian who did not share a great relation with Don Bradman