Sarfraz Ahmed is Pakistan the captain in all three formats i.e. Tests, one day internationals and Twenty20.

London [United Kingdom]: The bowling coach of the Pakistan cricket team Azhar Mahmood has said that the Pakistan Cricket Board (PCB) has taken the right decision in appointing Sarfraz Ahmed as the captain in all three formats of the game at the international level i.e. Tests, one day internationals and Twenty20. In a blog for PakPassion.net, Mahmood said, “Conventional wisdom dictates that being a captain of any side is a stressful job, but to be appointed captain for all three teams can add a whole new level of pressure. However, in my opinion, having one captain for all three formats is the right decision. The reason is simply that one captain can have a better overall view of the workload on all players involved in the three teams.”

He added, “Each captain would want the best for his team without looking at the larger picture, which is something one captain in all formats can do with ease. He would be able to see how best his bowlers would be utilized with least amount of fatigue during the whole tour or series, rather than focusing on specifically on one format of the game.”

“One more advantage of having one captain is that he can develop a good understanding of all players in the squad across all formats. From a player’s point of view, he has to deal with three different captains and understand their style of thinking which can be confusing so having one captain can easily solve this problem,” Mahmood stated further.

The Pakistan bowling coach was also all praise for the team’s recent performances on the field, and emphasized that work and not just individual performances behind Pakistan’s improved showing

“It’s not just the manner of our victory in the Champions Trophy or our performances in the Independence Cup which gives us hope of better days ahead for Pakistan cricket. Our victory in the Caribbean during our last visit there where we won the series in all formats, including a historic Test series victory, is also a pointer to our upward trajectory. The momentum, by the grace of the Almighty, is with us and the improvements continue to come in our cricket,” he said.

“Let me also add that the batting improvements are not just due to one person, but are a team effort. We are seeing more robust partnerships between batsmen and the reliance on one player to get us those big scores is slowly disappearing. This is a great sign for a young team like ours and the response by each team member to the challenges thrown at them is very pleasing,” he added.

He also said that the Pakistan bowling line-up is functioning like a well-oiled machine.

“Hasan Ali is a prime example of someone who is young, fit and strong who has no qualms playing all formats of the game. He is not alone, even Mohammad Amir’s bowling has been improving and his strength as we saw in the Champions Trophy and also during the County Championship is also back to its best. The same applies to other fast-bowlers such as Junaid Khan, Mohammad Abbas and Wahab Riaz who has recovered from injury. Amongst the spinners, we see that Yasir Shah who took 25 Test wickets in the tour of the West Indies is now fully fit and there is no end to Shadab Khan’s enthusiasm to perform for his country. All our bowlers are getting better but the best part is that they are all chipping in and they are all performing their roles to perfection. We are starting to win based on a collective effort rather than one bowler performing outstandingly well in every game,” he said.

Mahmood said that apart from batting and bowling, “our fielding is also continuing to improve by leaps and bounds as well.”

“This is a direct result of a culture of fitness that has been created in the team with our players looking leaner and fitter which results in an excellent overall impact on the performance of the team. But achieving this standard has not been easy and as the team management you have to stand your ground on such issues. Obviously, some people will not like this, but the fact is that we will not compromise on fitness issues to the detriment of the team,”Mahmood said.

“The result of this stance is obvious as the players are performing better now due to being fitter than before. To be clear, fitness does not make you perform any better if you don’t have the skills, but what it does do is give you a better chance to perform even better than before,” he added. (ANI) 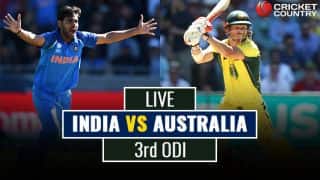