Rishabh Pant cracked 111 runs as India Under-19 post a humongous total of 349 for 6 against Namibia Under-19 in quarterfinal at Fatullah.

India Under-19 after winning the toss, decided to bat first on a pitch that looked as a batting paradise against Namibia Under-19 in the quarterfinals of the ICC Under-19 Cricket World Cup at Fatullah were steered  by a Rishabh Pant century to a imposing total of 349 for 6 in their 50 overs. Pant scored 111 at blistering pace which included 14 four’s and 2 humongous six’s in just 96 balls. Pant got to his century in 82 balls. Pant got out to Francois Rautenbach tyring to hit another four. After Pant it was Sarfaraz Khan and Armaan Jaffer show that over took his belligerent form hitting the Namibian bowlers all over the park. Sarfaraz who started a bit slow managed to get to his half-century in 59 balls and ended up making 76 off 76 balls getting caught on the second chance by Louwrens. This was also Coetzee second wicket.  Mahipal Lomror destroyed Coetzee in the final over hitting three huge sixes, achieving 24 runs.  LIVE SCORECARD: India vs Namibia, Quarter-Final-2 of ICC Under-19 Cricket World Cup

Armaan Jaffer continued his scoring and brought up his half -century in 48 balls including four boundaries. Jaffer and Sarfaraz had a 98 run stand for the fourth wicket before Sarfaraz got out trying to hit a six. Jaffer and Mahipal Lomror added runs in the for the fifth wicket. Jaffer got out to Coetzee caught at mid-wicket, this time Louwrens grabed in just one go. Jaffer’s innings of 64 included four boundaries and single six. M Namibia’s best bowler was Coetzee picking up three wickets in his quota of 10 overs. Niko Davin, Rautenbach and SJ Loftie-Eaton were the other wicket takers. Washington Sundar was Loftie-Eaton solitary wicket, making just one run.

India lost out on on skipper Ishan Kishan early on in their innings for just 6 runs in 8 balls. Kishan was picked up by Fritz Coetzee to a delivery that got a bit of support from the pitch slowing down as it reached the batsman. Kishan managed to give an easy catch and bowl back to Coetzee. Anmolpreet Singh who joined Pant also chipped in with 42 balls 41 which had five boundaries and single six. Anmolpreet and Pant added 103 runs for the second wicket at 6.94 run-rate in 14.5 overs before Anmolpreet was picked up by Davin. 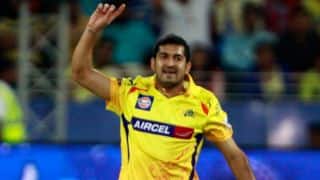