Pant has taken giant strides in the recent past.

New Zealand former head coach Mike Hesson has said that India’s wicket-keeper batsman Rishabh Pant is more confident and his approach is no longer reckless. It was earlier noticed that Pant used to play uncalled shots, which were not required according to the match situation.

However, Pant has taken giant strides in the last few months and he has done a fine job for the Indian team. Pant had scored 274 runs in the three-Test matches against Australia, including a match-winning knock of 89 runs in the historic Gabba Test match.

Subsequently, he scored 270 runs in four Test matches against England in the home conditions. Pant has the skills to turn the match on its head with his blistering batting and he is going to play a crucial role for the Indian team in the World Test Championship final against New Zealand and the five-match series against England.

“I think he’s more confident, more settled on the international stage now. Therefore, he’s able to play the way he wants to play. He has earned enough credit within his team as well,” Hesson told the Press Trust of India.

“He also does the hard work first, so it’s not a reckless play. He allows himself that chance to show a bit of flair, which we all enjoy watching.”

On the other hand, former Indian chief selector MSK Prasad also heaped praise on Pant as he had kept brilliantly in the home Test series against England.

“People said that he can’t bat in Test cricket and can’t keep in challenging wickets. So, what has happened today? See, how he kept wickets against England at home. Many people never believed that Pant would be so good,” Prasad told cricket.com.

The World Test Championship final will take place at Ageas Bowl, Southampton from June 18 and Pant is going to play a key role. 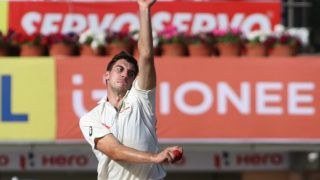