With his batting form in limited-overs cricket under close scrutiny, Rishabh Pant approached his coach Tarak Sinha to free his mind and get his mojo back. With his batting form in limited-overs cricket under close scrutiny, Rishabh Pant approached his coach Tarak Sinha to free his mind and get his mojo back.

Ahead of the three-match T20I series against West Indies, Pant worked on his bat swing with his coaches at the Sonnet Club in New Delhi. The result was evident in the series opening Hyderabad T20I where he scored an 18 not out off 9 deliveries followed by yet another unbeaten knock off 33 which pushed India to a challenging total.

“He always says he feels (mentally) lighter when he comes to the club,” Sinha told The Times of India. He would complain that he couldn’t get on with his shots. Everything seemed half-hearted. He would premeditate and plonk his front foot forward. Then he said he wanted to practice big shots. That freed him up and the bat swing was back.”

After registering a duck in the third and final T20I, Pant went on to record a maiden ODI fifty in Chennai against West Indies, knock that came when India were in a tricky spot. Interestingly, the 22-year-old abandoned his attacking approach at the start, settling in before bringing out the big shots. He scored a 69-ball 71.

“I told him people are blocking the on-side. His stance had opened up and he was dragging balls from outside the off-stump to the leg-side. He had to realise that he had to revive his off-side game,” Sinha said.

India lost the first ODI by eight wickets and will aim to draw level in Vizag on Wednesday. 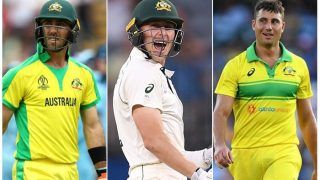