Delhi Daredevils chased down Gujarat Lions target of 150 which much ease as opener’s Quinton de Kock and Rishabh Pant constructed a 115- run stand for the first wicket. De Kock and Pant looked in total control of the game as they muscled, powered and drilled the Lion bowling all around the park due to which DD defeated GL by 8-wickets. Pant was the most destructive of the lot bring up his first ever Indian Premier League (IPL) half-century. Pant playing his playing his third IPL game, showed why he was so highly rated by DD mentor Rahul Dravid. Pant was purchased by DD for a massive price of Rs 1.9 crore. Pant took a special liking to the spinner who were hammered. Pant brought up his fifty in just 25 balls which already included 8 boundaries and 1 six. De Kock who is more established of cricketer between the two, took his time and let the young lad display his thunderous batting show. LIVE CRICKET SCORECARD: Gujarat Lions vs Delhi Daredevils, IPL 2016, Match 31 at Rajkot

Pant departed from the crease making a swashbuckling 69-off 40 balls. Ravindra Jadeja picked up the wicket of Pant, as he could only manage an inside edge to wicket keeper Karthik on 69 which included 9 boundaries and 2 massive sixes. With Pant’s wicket the first wicket stand of 115 between himself and De Kock came to an end. De Kock innings also missed out on a well deserved half-century as he gave his wicket away trying to bring up his fifty with a six. De Kock slogged a simple catch to Dwayne Smith who was standing at mid wicket region handing Shivil Kaushik his first wicket.  After the fall of Pant and De Kock it was Sanju Samson and JP Duminy, who together got their team to safety. Samson was lucky to survive a stumping call as the bowler Jadeja has easily overstepped. Samson finished an easy chase in style as he smashed Jadeja for a massive six to finish the game giving DD 2 points.

Earlier in the match, Gujarat Lions batting first could only manage 149 runs for 7 in their quota of 20 overs. It was a half-century by Dinesh Karthik and small cameos’ by Suresh Raina and Ravindra Jadeja that helped them to put up something decent for their bowlers to defend. Karthik cracked his second IPL 9 half-century in  just 42 balls, Karthik had two fifty run partnerships stand with Raina (51) and Jadeja (52). 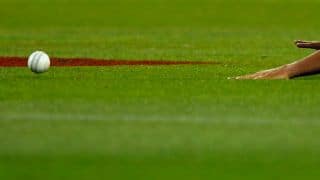