The 3rd ODI at MCG is a must-win situation for India after losing the first two matches.

Rishi Dhawan and Gurkeerat Singh are set to make their One-Day International (ODI) debuts for India during the third ODI against Australia at Melbourne Cricket Ground (MCG) on Sunday. Dhawan and Gurkeerat’s inclusion meant Ravichandran Ashwin and Manish Pandey have to sit out of the playing XI. India losing the first two games of their ongoing five-match ODI series is under immense pressure and once again Indian limited-overs skipper MS Dhoni has made a surprise inclusion by selecting these two debutants in India’s must-win encounter against the hosts. Meanwhile, Australia made one change—Mitchell Marsh who missed the second ODI is back with Joel Paris missing out this time. FULL CRICKET SCORECARD: India vs Australia 2015-16, 3rd ODI at MCG

Australian skipper Steven Smith won the toss and chose to bowl first in the third ODI. In the last two matches, Australia batted second and successfully chased down India’s massive totals of 300-plus. The inexperienced Indian bowling attack has failed to defend big totals so following the loss in the second ODI at Brisbane, Dhoni asked his batsmen to add at least 30 more runs than what they have put on the board so far.

“You can’t win a match only by scoring runs or you cannot score only 280 and say the bowlers have to win the match. Both departments have to improve. Scoring 300 in back-to-back matches is quite tough anywhere, but we have done it in Australia,” Dhoni had added. Live Cricket Score, India vs Australia 2015-16, 3rd ODI at MCG

Meanwhile, Australia’s George Bailey who had earlier suggested that it will be big deal for India to defeat Australia Down Under, said, “I just feel like I’m hitting the ball cleaner and crisper.” Bailey has scored 112 and an unbeaten 76 in the series so far. 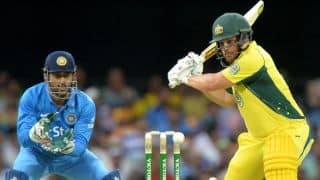 Pick of the tweets: Australia vs India, 3rd ODI at Melbourne