Roach hits Netherlands for a 'six'er

Roach hits Netherlands for a 'six'er

Kemar Roach became the sixth ever bowler in the history of World Cup cricket to pick up a hat-trick. And in doing so, he also joined a group of others to pick up a six-wicket haul in World Cups. 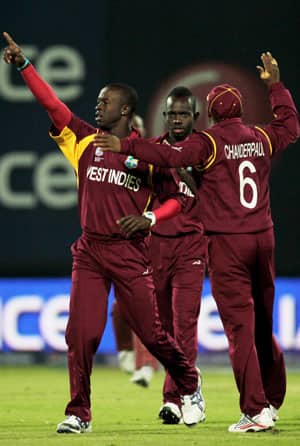 Kemar Roach became the sixth ever bowler in the history of World Cup cricket to pick up a hat-trick. And in doing so, he also joined a group of others to pick up a six-wicket haul in World Cups. The pace was right up to the levels that had catapulted him into the limelight after hitting Ricky Ponting at the WACA in 2009 and the West Indian side ran home winners by 215 runs.

Stung badly by South Africa, that a different West Indian side had come out to face Netherlands was hardly of doubt. However, to watch Netherlands go down in such a heap would have pegged the Associates hopes back after their performance in the England match had raised hopes.

While 331 was always going to be hard ask from a team without too much experience at this level, their capitulation for 115 was a sore to the eye after the escalating expectations thanks to Ryan ten Doeschate s century at Nagpur last week.

It was a second such collapse on the day after the Canadians had been bowled out for 123 by the Zimbabwean spinners earlier in the day.

Roach was all over the Dutch like a rash. He started with the wicket of Wesley Barresi, caught smartly by Chris Gayle. Then, keeping the ball up to the bat, he had former Netherlands skipper Bas Zuiderent groping and seeing his stumps on the ground within miniscule moments from each other.

After being taken out of the attack, the Dutch recovered for a while but not enough to challenge the West Indies to double their score through the seventh wicket stand. Tom Cooper continued with his good form and got to a half-century while Mudassar Bukhari followed up his two-wicket haul with a 24.

And then Roach returned to send the remaining four to the pavilion in a spell of six deliveries. Bukhari went back to the pace of Roach and was bowled, Pieter Seelar had no clue to a quick in-swinging delivery and was caught plumb in front of the wickets, Bernanrd Loots wasn t too adept at picking another in-ducking ball from Roach while Berend Westdijk had his stumps flattened the last three of them constituting the hat-trick.

In the interim, Sulieman Benn had Alexie Kervezee trying to go after him and in the process being stumped before getting the prized wicket of Ryan ten Doeschate.

While batting, the West Indian start seemed to have surprised the Dutch. The usually reticent Devon Smith overshadowed his tall-scoring partner, Chris Gayle and by a country mile. When he got to his half-century, Gayle, probably still surprised by his first-over dismissal and inspired by Virender Sehwag s ability to bat through the entire duration of the innings against Bangladesh was only on 35.

Later Smith failed to convert his start into something more substantial, but he had provided the base to work on. Gayle made 80, there was a near-half century from Ramnaresh Sarwan but the innings that purportedly sunk the Dutch was Kieron Pollard s 27-ball 60.

The think-tank made a wise decision to send him in with almost 14 overs to spare and Pollard demonstrated what he can do with them. With the Batting Powerplay on, Pollard slammed on the gas and took most of the 53 that came in those five. With the wind off the Dutch bowling sails, the rest of the side launched into a similar offensive and took West Indies to a near-impregnable 330.

Dwayne Bravo, who was ruled out of the tournament due to a knee injury had his place taken by Nikita Miller.

Man of the Match: Kemar Roach.