During the 1980s, cricket wasn’t really known for athletic fielders and there were only handful of them who could make a fan’s jaw drop. If one compares to the fielding standard in the modern cricket and the catches we see today, such catches in those days were rare.

In the video, we go back to the 1986-87 in the Benson & Hedges Challenge series involving Australia, Pakistan, England and West Indies in Australia. It was the fourth match of the series and was played between West Indies and England. West Indies having chose to field had a dream start when they got England 96 for five at one stage when Allan Lamb and Jack Richards got together.

The pair went on to add 58 runs before West Indian all-rounder Roger Harper took a very good catch at point to dismiss the set Lamb off the bowling of Malcolm Marshall. It was invitational off-stump delivery from Marshall and Lamb playing on 71 slashed hard at it. The ball flew towards the point fielder; and seemed set to travel over the fielder’s head towards the boundary.

But Harper, the six foot four inch fielder, standing at point, took a giant leap in the air and caught the travelling ball one-handed. Geoffrey Boycott summed it well in the commentary that he ‘plucks it out of the sky.’

The West Indian long legs worked in the favour of the fielder; Harper is often described as a ‘fabulous fielder’ and so for him, it probably was a piece of cake. However, it was not all smiles for West Indies as they lost the match by 19 runs. England won the series while West Indies only managed to win one game in the series. 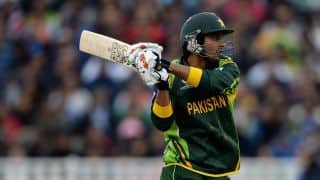