Rohit Sharma finally managed to capitalise on his start and completed his 21st One-Day International half-century against New Zealand but Ambati Rayudu failed to keep his wicket intact being dismissed for 37.

Rohit started off tentatively being tested by balls pitching outside off. Soon he settled in but India had lost two quick wickets. Along with Rayudu, Rohit stitched up for a valuable half-century partnership.

They weren’t just rotating the strike but managed to get some big hits. By the 26th over, the two had hit five sixes and seven boundaries.

Rayudu was finally dismissed trying to be a touch too aggressive. With his eye in, Rayudu was looking good for a long innings and went after the short ball and India lost yet another wicket in a similar fashion. The ball lobbed up behind the wickt on the off and was caught by Luke Ronchi. 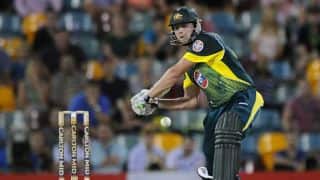