Rohit had injured his right hand middle-finger during the One-Day International (ODI) series against England.

Assistant coach of Indian team Sanjay Bangar showered praise on Rohit Sharma after the batsman made a comeback from injury to open the batting and score a ton for India A against Sri Lanka. Rohit scored 142 in 111 balls which involved 18 fours and a six. Rohit and Manish Pandey’s tons propelled India A to 382 and the home side completed a comfortable 88-run win.

“He is a quality player. He didn’t get a game because of the injury. His match fitness had to be assessed and that was the reason that the selectors had roped him in. He gave a fantastic account of himself. He has been practicing really hard over the last 10 days at BKC,” Bangar said after the match.

“He showed the total recovery from that injury while batting and he showed no discomfort at all. He fielded throughout the 50 overs and those are good signs for the Indian team,” he added.

Rohit had injured his right hand middle-finger during the One-Day International (ODI) series against England on tour. He also missed the subsequent home series against West Indies. In order to assess his fitness, the opener was kept out of the squad from the first three ODIs.

There have been talks about India’s opening pair going in to the series ahead and the ICC World Cup 2015. Shikhar Dhawan and Ajinkya Rahane are currently opening the batting for India in the limited overs. With the national selector Sandeep Patil watching the proceedings today, this innings of Rohit is likely to bring him back into the team for the final two ODIs. 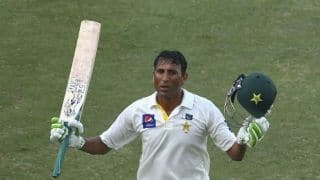