Rohit Sharma led the mid-innings rescue effort after a top-order collapse as India 'A' managed to take a slender 25-run lead against the West Indies 'A' on the second day of their first four-day cricket Test. 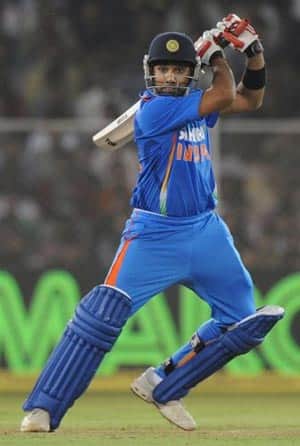 Rohit Sharma missed out on a century , getting out on 94 Getty Images

Rohit Sharma led the mid-innings rescue effort after a top-order collapse as India ‘A’ managed to take a slender 25-run lead against the West Indies ‘A’ on the second day of their first four-day cricket Test.

Rohit missed out on a century, falling for 94, but his carefully crafted knock, complemented by skipper Cheteshwar Pujara (50) and Wriddhimaan Saha (56), pulled India out of trouble after the top-three departed, contributing just nine runs to the total.

For the Caribbeans, medium-pacer Jonathan Carter was the wrecker-in-chief scalping five wickets in his 17 overs and he was ably supported by express bowler Delorn Johnson, who managed three for 29 in 14.1 overs.

The Indian bowlers had done a fine job by bowling out the hosts for 252 on the first day itself but the team put up a below-par effort with the bat to leave the match wide open.

It was a nightmarish start to the day for the Indians as opener Abhinav Mukund was castled for a naught by Johnson with the team score reading just one run.

One-down batsman Ajinkya Rahane did not last long and was run out by Lendl Simmons. Rahane too went back without disturbing the scorers.

Shikhar Dhawan (9) nicking one to wicketkeeper Devon Thomas off Carter added to India’s woes before the middle-order dropped anchor and started rebuilding the innings.

Pujara and Rohit put on 93 runs for the fourth wicket before the former was caught by Thomas off Carter just after completing his half century. Pujara struck seven fours and took 97 deliveries for his knock that steadied the rocking Indian boat.

Next man in Manoj Tiwary (40) carried on the rebuilding task and combined for 72 runs with Rohit, whose 159-ball innings was studded with 10 fours and three sixes.

Tiwary’s fast-paced batting gave the much-needed acceleration to India’s scoring and he struck down three boundaries and a couple of sixes before being trapped LBW by Jason Holder. His dismissal left the team at 186 for five before Rohit also departed 18 runs later.

Wickets were tumbling around him but Saha held fort and put on 46 runs for the 10th wicket with a resolute Ashok Dinda (8).

Saha’s 56 runs off 92 deliveries included half a dozen fours before he was dismissed by Johnson. The Indian innings folded in 81.1 overs and Lendl Simmons (2) and Kraigg Brathwaite (0) were at the crease for the hosts at close of play yesterday.

The second and third match of series will be played at Kingstown and Gros Islet respectively. (PTI) 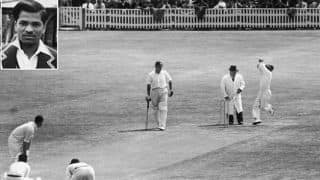 Ball of the century: Agony for Sonny Ramadhin, ecstasy for Shane Warne

Paradise Lost: The civil war that is destroying the rich legacy of WI cricket