Rohit Sharma played with much panache on a slowing pitch but Rajasthan Royals tied the Mumbai Indians down extremely well to restrict them to 133 for five in their 20 overs. 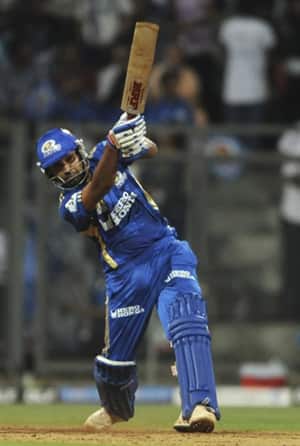 Rohit Sharma played with much panache on a slowing pitch but Rajasthan Royals tied the Mumbai Indians down extremely well to restrict them to 133 for five in their 20 overs. Sharma did well to get to his half century before being stumped off the last over of the game off Shane Warne, playing in his last IPL game.

The Mumbai Indians won the toss and decided to bat first on a slowish track at the Wankhede Stadium in Mumbai. The Rajasthan Royals had made many changes to their playing eleven, with the likes of Ross Taylor and Shane Watson making a comeback to the side.

Immediately off the second ball of the innings, Ankeet Chavan seemed to have got the better of Tendulkar but the umpire decided that the ball was pitching outside the leg-stump.

Adrien Blizzard was replaced by T Suman at the opening slot, but the shuffle did not work in Mumbai s favour. Off the third ball of the second over of the game, he flicked Shane Watson to the square-leg fielder.

Ambati Rayadu has been one of Mumbai s more consistent batsmen in the tournament, but he lasted all of eight balls. Watson had Rayadu trying to hit the ball over the ring but only managed to get the leading edge to Ross Taylor. Mumbai Indians were in strife at 17 for two at the end of the fourth over.

Chavan continued to bowl with much guile and got close to getting Tendulkar out in both, his third and the fourth over, ending his four-over spell with 17 runs conceded off him. Visions of the previous game between Mumbai and Rajasthan, where the Mumbai Indians had been restricted to a sub-100 score, were raised when the side got to only 31 by the time the seventh over had been bowled.

The Mumbai Indians kicked on in the eighth over with nine off Siddharth Trivedi s first over before Warne went for 11 in his opening over. Rohit Sharma was the man responsible to get things moving as Tendulkar continued to play the role he seems to have mastered in the tournament bat through the innings and allow the others to take the bowling on.

Amit Singh was greeted by a cheeky dab over fine-leg for a four but cut a short one from the same bowler to the third-man fielder off the very next ball. Tendulkar s grafting 31 had come off 35 balls.

It was a fourth wicket stand between Rohit Sharma and Kieron Pollard which took the Mumbai Indians out of the potential mire than they found themselves in.

Sharma smacked a four and a six in the 14th from Amit Singh before hitting Botha inside-out to the fence in the next. Warne conceded only five but immediately after the time-out, Pollard smashed a couple of boundaries of Ashok Menaria to propel the score along.

Watson returned to pick up his third wicket in his spell of Pollard, conceding only 19 from his four and when Botha had conceded only three off the first five balls of the 19th, it looked like the Mumbai Indians would be restricted to a manageable score.

James Franklin, however, smacked Botha for a four off the last ball before hitting Warne for another boundary in the last to take the score along to 133.