Rohit Sharma scored 83 off 93 deliveries while Suresh Raina played a match-winning knock of 89 from just 79 balls to guide India to a five-wicket victory over England n the fourth One-Day International at Mohali and take an unbeatable 3-1 lead in the ODI series. 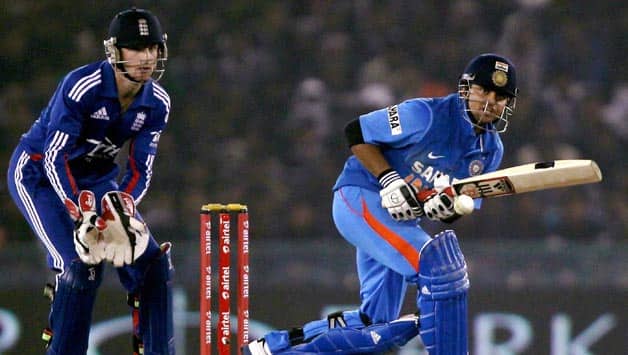 Rohit Sharma scored 83 off 93 deliveries while Suresh Raina played a match-winning knock of 89 from just 79 balls to guide India to a five-wicket victory over England n the fourth One-Day International at Mohali and take an unbeatable 3-1 lead in the ODI series.

Coming into the side in place of Ajinkya Rahane, Rohit made most of his chance as he played a crucial knock to keep India alive in a steep chase.

Gautam Gambhir failed to stay at the crease for too long as he was dismissed by Tim Bresnan for just 10 runs. Number three batsman Virat Kohli and Rohit put on a 52-run stand for the second wicket as they rebuilt the Indian innings in conditions that was still assisting the fast bowlers.

Just when Kohli was beginning to sight the ball nicely, he fell to a soft dismissal to give James Tredwell his first wicket of the game. Tredwell then got rid of Yuvraj Singh to bring England back into the game.

But, Rohit continued to score runs freely as he and Raina put on an important partnership of 68 for the fourth wicket before Rohit became a victim of poor umpiring when he was adjuded leg before wicket to a delivery that was missing his leg stump. Rohit walked back after a crucial knock of 83 off 93 balls.

Indian skipper MS Dhoni joined Raina when India still needed 100 runs to win from 113 balls.The duo put on 55 runs for the fourth wicket before Jade Dernbach struck against the run of play to get rid of Dhoni and reduce India to 213 for five.

Indian bowlers took goo advantage of the favourable conditions at Mohali to trouble the England batsmen and stifle them for runs. Ian Bell was the first one to fall as the frustration of lack of runs got the better of him and he gave a low catch to Bhuvneshwar Kumar at third man.

Pietersen joined his skipper Cook in the middle and the duo began to consolidate the England innings. Cook brought up his half-century while Pietersen struggled to spot the ball and was beaten several times by Ishant Sharma. Cook became a victim of poor umpiring yet again after he was given out leg before on a delivery that pitched outside his leg-stump. He went back after a well-made 76.

England lost their way in the middle but youngster Root combined with Pietersen for some final overs blitz. Pietersen went after Ishant, scoring a boundary and a six off two consecutive deliveries but was beaten all ends up by a Yorker that uprooted his middle stump.

Root continued to play his cameo and brought up his first ODI half-century in the 50th over to take England to 257.