MS Dhoni had a pleasant outing leading Jharkhand to the semi-finals and slamming 330 runs at an average of 66. However, there was no mention of his name in the squads announced to take on Tamil Nadu in Deodhar Trophy.

The Board of Control for Cricket in India (BCCI) on Tuesday announced the squads for India Blue and India Red to take on the winners of Vijay Hazare Trophy 2016-17, Tamil Nadu, in the upcoming DB Deodhar Trophy. The triangular series will be played from March 25-29 on Visakhapatnam. Rohit Sharma, who has not played an international game since the ODI series against New Zealand last year, will lead India Blue whereas Parthiv Patel has been announced captain of India Red. However, the biggest omission from the two sides has been MS Dhoni. Dhoni had a pleasant outing leading Jharkhand to the semi-finals, slamming 330 runs at an average of 66.

According to a media release, the squads present a mix of top performers from the recently-concluded Vijay Hazare Trophy. Some of the renowned names are Govinda Poddar, Krunal Pandya, Prasidh Krishna, Shardul Thakur, Pankaj Rao among others. The fringe players from national setup and regulars in the A side, comprising of Rishabh Pant, Shreyas Iyer, Mayank Agarwal and Dhawal Kulkarni, have also been included. India s limited-overs specialists, Shikhar Dhawan and Akshar Patel, have also got a look-in.

Manoj Tiwary has been included in the side at the back of some good showings with the bat. The selectors have also gone ahead with out-of-favour players like Harbhajan Singh, Ashok Dinda and Ambati Rayudu.

The tournament is set to serve as a platform for national and fringe players like Rohit, Manish Pandey, Dhawan, Akshar, Jadhav and Gurkeerat Singh to make a mark ahead of India s next schedule in shorter formats, ICC Champions Trophy 2017. The tournament will be held in England and Wales from June 1. 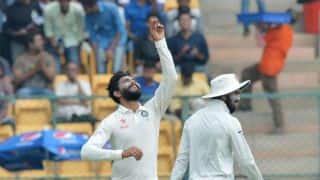