Rohit Sharma, who was announced as CEAT's Indian Cricketer of the Year says that India's aim to regain the No.1 spot in Tests and he wants to be part of the No.1 Test team in the world in times to come.

Mumbai: Star batsman Rohit Sharma, who was on Monday named the CEAT Indian Cricketer of the Year, wished to be a part of the country’s World No.1 Test team. India is scheduled to play four away Test matches against the West Indies followed by three home Test series later on in the year and Rohit is hopeful that the team will perform well. “India has lot of Test matches coming up. We will travel to West Indies and then will play a couple of Test series at home,” Rohit said. “We will aim to regain the No.1 spot in Tests. I want to be part of the No.1 Test team,” he added. ALSO READ:Rohit Sharma reveals his secret behind number 45

Hailing the team’s last season’s performance, Rohit said he was disappointed to not win the ICC World T20 in India. “We had a wonderful year in 2015-16. We created history in Sri Lanka in Test series after winning it and then against South Africa at home. Then we had the limited overs series in Australia, followed by a good series against Lanka, then Asia Cup,” he said. “We also had a good World T20 but could not win the title. It happens in cricket. But West Indies deserves the credit as they were the beat team,” Rohit added.

Off-spinner Ravichandran Ashwin, who was awarded the International Bowler of the Year, credited first class cricket for helping him develop the skills. “Indian Premier League (IPL) gave me the opportunity to showcase my skills. But first class gave me the start in my career. I learned the basics in first class and Ranji Trophy,” Ashwin said, while expressing his desire to bowl four back-to-back maidens in a T20 match. “I also strive to improve my bowling. My dream is to bowl four maiden overs in a T20 match.” 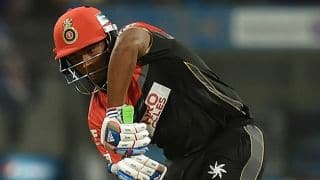