Rohit Sharma now has second most ODI hundreds against Australia. Only Sachin Tendulkar (9) stands ahead of him.

India outplayed Australia at VCA Stadium, Nagpur to win the fifth and final ODI of the five-match series by 7 wickets. India, riding on Rohit Sharma‘s 14th hundred, made the 243-run chase a cakewalk to lift the series 4-1. By virtue of this victory, India also reclaim the No. 1 spot in ICC ODI rankings. They attained the coveted position after the Indore win, but were pushed to No. 2 after the Bengaluru encounter.

In pursuit of 243, Indian openers Ajinkya Rahane and Rohit laid the foundation with another sublime century-run stand. This is their third consecutive 100-run partnership. Rohit took 15 balls to get off the mark, but did it in style. A lovely off drive to Pat Cummins eased him out the middle. Rahane, on the other hand, looked at his fluent best. He leaned onto the front-foot to slightly pitched up deliveries, and flicked anything offered on the pads.

However, Rohit and Rahane were troubled by Adam Zampa for a brief period. With the slowness of the track, the leg spinner troubled the Indian duo and found the edge on few occasions. Nonetheless, luck favoured hosts and the Indian pair mustered runs at will. Rohit slammed the first six of the Indian innings in the 18th over, off Travis Head. Steven Smith rotated his bowlers, but found no respite.

Australia banked on Marcus Stoinis and James Faulkner’s slower ones but they remained ineffective and erratic. It was a better batting performance on a pitch favouring the slower bowlers.

Rohit was the first to slam a fifty. Rahane also scored his fourth consecutive half-century, but missed out on a hundred; falling for 61. He tried to work the ball around leg side, missed the length due to the change in pace and was adjudged lbw. He would have been pleased with a big knock in regular opener Shikhar Dhawan’s absence.

Virat Kohli stitched a handy stand with Rohit, and brought India close to the target. Rohit attacked the spinners to slam 6,000 ODI runs (in 162 innings) and kept the scoreboard moving. With a huge six off Nathan Coutler-Nile, a pull towards mid wicket, he registered another three-figure score in his blistering ODI career. This is his 14th ton, and sixth versus Australia. He is only behind Sachin Tendulkar (9) in terms of most hundreds by an Indian versus Australia.

India lost Kohli and Rohit before the final hurdle. The winning runs came off Manish Pandey’s blade as India trounced Australia with 43 balls to spare. Earlier, opting to bat, Australia were off to a good start before Indian spinners pushed them on the back-foot. Kedar Jadhav, Kuldeep Yadav and Akshar Patel did the bulk of damage before Bhuvneshwar Kumar and Jasprit Bumrah dented visitors’ progress in death overs.

David Warner (53), Travis Head and Stoinis stood tall on a batting pitch amidst a tame effort. Indian bowlers dominated by altering their length and dropping the pace off the ball regularly.

Also, Kohli goes past Ricky Ponting in terms of most wins after 40 ODIs. He, thus, joins an elite club comprising of Clive Lloyd and Viv Richards. With India’s next 50-over assignment against New Zealand, he will be eager to extend his golden run as skipper.

Man of the Series: Hardik Pandya 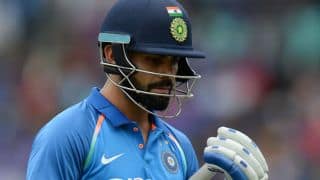 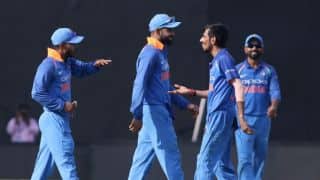