With this win India have maintained their record of wining all their three-match T20I series.

India dominated England in the final T20I at County Ground, Bristol winning by 7 wickets. Rohit Sharma was the architecture of the win recording his third T20I century. He got his century in just 56 balls to equal the record of most centuries in T20I along with Colin Munro. His innings included 11 fours and 5 sixes as India won with 8 balls to spare. With this win India have maintained their record of wining all their three-match T20I series.

Shikhar Dhawan got off the mark with a glorious drive on the off side but was unfortunate to not score big. He was out to a brilliant catch by Jake Ball. Dhawan failed to keep the ball down as Ball took a diving catch to his left at short fine leg. KL Rahul who too got off the mark with a straight drive and was looking in good touch was done by an unbelievable catch from Chris Jordan. Rahul hit the ball high in the air which stayed there for a while. Jordan running backward from mid-on took a diving catch near the boundary rope.

Virat Kohli and Rohit then added 89 runs to the fourth wicket partnership. In the process, Rohit completed 2,000 T20I runs to become the second Indian to do so and fifth overall. Kohli was playing well on 43 until Jordan took a great reflex catch to dismiss him. To everyone’s surprise Hardik Pandya came in to bat ahead of Suresh Raina and MS Dhoni. The decision did not prove to be wrong as he smashed 33 off 14 as he finished the match with a six.

Among the bowlers, Ben Stokes was the most economical but did not complete his quota of 4 overs. Ball, David Willey and Adil Rashid managed to pick up one wicket each but none of them could maintain pressure. Liam Plunkett was the most expensive bowler leaking 42 runs in 3 overs.

In the first inning, Jason Roy’s 67 off 31 balls guided England to a huge total of 198 in 20 overs. However, Indian bowlers did well to pull things back in the end overs restricting from going past 200. Hardik was the star with the ball picking 4 for 38. 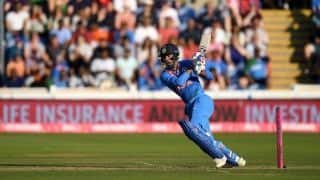 Learning from my mistakes with every game: Hardik Pandya