Rookie Dimuth Karunaratne was picked to open the Sri Lankan batting with veteran Tillakaratne Dilshan in the first Test against Australia in Hobart on Friday. 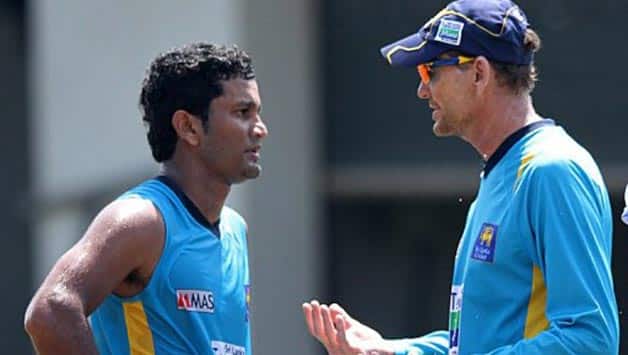 Rookie Dimuth Karunaratne was picked to open the Sri Lankan batting with veteran Tillakaratne Dilshan in the first Test against Australia in Hobart on Friday.

The 24-year-old will be making only his second Test appearance on an expected lively Bellerive Oval wicket in the first of three Tests.

Former Australian fast bowler Rodney Hogg has rubbished the Sri Lankan quicks as the “worst ever” to come to Australia, with Kulasekara, Eranga and Welegedara only having 38 Tests and 99 wickets between them.

Skipper Mahela Jayawardene said injuries and retirements had forced Sri Lanka to overhaul their new-ball attack, but he was confident his pace brigade could do the job against the third-ranked Australians.

“Teams have to start somewhere. I think we’ve lost some fast bowlers in the past and some with injuries and this is an attack that is probably different,” Jayawardene said.

“We don’t probably have the pace that you (Australia) think is required to win Test matches in Australia, but we’ve got guys who will bowl good line and length and create opportunities and if we keep to that I think we stand a good chance.

“We’ll see. We’ve got three Test matches to play and once we finish that I’ll have a chat with Rodney Hogg.”

Jayawardene said the team would not be pursuing Lasith Malinga to break his Test retirement to bolster the Sri Lanka attack.

“Lasith has made up his mind. I think with his injuries in the last two or three years it’s pretty unfair of us to ask him to come and play Test cricket,” he said.

Jayawardene added that it was up to Sri Lanka’s experienced batting core of Dilshan, Kumar Sangakkara, Thilan Samaraweera and himself to get the runs to give the team’s bowlers a chance to take wickets.

Sri Lanka have played 10 Tests in Australia but have never won.

“We’ll bank of our experience with our batting. To win a Test match it’s important to put runs on the board, we just need to score runs and give our bowlers a chance to get 20 wickets,” he said.

Jayawardene said the team has had a good preparation after a high-scoring draw with the Chairman’s XI in Canberra as their only leadup match.

“Over the last three days the nets practice and the preparation has been brilliant here, we had some really good weather and we had some long sessions trying to work out things that we need to do,” he said.

“Hobart will throw us some different challenges altogether. This is a sporting wicket from what we’ve seen this season how the domestic cricket has gone in Hobart.

“It gives us a fighting chance if we do a lot of things right and it’s about the processes, how we start the Test match and how we win the sessions.”