Olly Stone may be just two ODIs old, but the 25-year-old fancies his chances of playing the World Cup at home next year.

England s newest pace sensation Olly Stone may be just two ODIs old, but the 25-year-old fancies his chances of playing the World Cup at home next year. Stone s ability to bowl at over 140 promises to make him an option not easy for England to overlook, even if that means giving the bowler a long run with the team. Stone was called in for Liam Plunkett but considering his performance in the second ODI against Sri Lanka at Dambulla, there seems to be more to him than just a replacement bowler.

“I’d love to be part of the World Cup squad,” Stone said. ” I’ve come into this tour not really knowing what to expect and the boys have been great, and there is an opportunity to try to put your foot in the door and hopefully from these few games I can put in a good performance and show what I can do.”

Stone was in the Playing XI for the first ODI but could not get a chance to bowl because of rain. However, in the second match, it took Stone just seven deliveries to make an impression. He fired in a fiery bouncer to Niroshan Dickwella, who couldn t do much but glove it to the wicketkeeper. He finished with 1 for 23 in England s 31-run Duckworth-Lewis-Stern win managed to unsettle many batsmen with his speed.

“It is always a nice feeling to see batsmen ducking and diving,” Stone said. “It is just nice to come in and show them what I can do, I guess. There were a few nerves – all the noise was surreal. I was just trying to take it all in with a deep breath and then away I went.”

“It’s tough given the conditions, trying to figure out how your body will handle it, and not wanting to go all guns blazing at the start and blow out,” Stone said. “I’ve tried this year to go a little bit up and down the gears to try and look after my body – I have had a few injuries. Just trying to figure out when to go all guns blazing and when to hold back a little bit. That has been something I’ve worked on.”

However, it wasn t all merry for Stone. In 2016, he suffered a ligament tear, forcing him to manage the workload carefully. Prior to the two ODIs, Stone played five County games for Warwickshire picking up 28 wickets with a best of 7 for 59 against Durham. The extent of the injury was such that Stone admits that he never thought he d be playing for the country just two years later.

“It’s been crazy. When I got injured, if someone had said that two years later you’d be playing for England, I would have snapped their hand off,” he said. “It is a dream come true. It’s been a whirlwind few months and I’m just loving it. 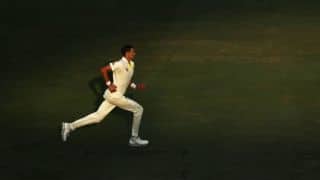