Chasing 422 to win their final warm-up game, wicket-keeper batsman Blundell made the most of the enforced absence of usual first choice Tom Latham to plunder 106 off just 89 balls at the Bristol County Ground.

Tom Blundell believes he is ready to crown a ‘whirlwind’ couple of months with an ICC Cricket World Cup debut after starring with the bat against West Indies.

Chasing 422 to win their final warm-up game, wicket-keeper batsman Blundell made the most of the enforced absence of usual first choice Tom Latham to plunder 106 off just 89 balls at the Bristol County Ground.

Despite his recent return to training, doubts nevertheless persist over Latham’s fitness ahead of Saturday’s opening clash with Sri Lanka in Cardiff.

And Blundell, a surprise inclusion in the Black Caps’ 15-man squad for the tournament, insists he is ready to seize his chance of a World Cup debut with both hands if the opportunity arises.

“It’s been a whirlwind two months really,” he said.

“I’m really happy to be here and to be able to contribute today was pretty pleasing.

“It was one of those wickets where the longer you bat, the easier it gets. Once you get in, it becomes quite easy.

“It was a good chance to get out there and do my thing. I’ve just got to back my ability, and today was just one of those days where it came off.

“I’m happy where my game is at currently, both keeping and batting-wise.

“Tommy is coming along pretty nicely – he’s keeping and batting so if I don’t get a chance, so be it.

“It’s a World Cup, so it’ll be a pretty happy day if I do get a chance to debut.”

Chasing what would have been a record score for a New Zealand side, the Black Caps ultimately fell 91 runs short of history despite Blundell’s knock and a brilliant 85 from captain Kane Williamson in Bristol.

Blundell, though, saw plenty of cause for optimism ahead of the tournament curtain-raiser – not least the ability to adapt to the conditions and grind out runs.

He added: “The grounds over here are pretty different. Here it was a pretty short straight and quite long width so it’s a bit of a mixture – you’ve just got to adapt.

“It was a good work-out for our bowlers. They came at us pretty hard and we’ll look on our plans moving forward.

“For us as a whole, it was a good day for us. Chasing 422 is pretty tough. What we ended up on was pretty pleasing.” 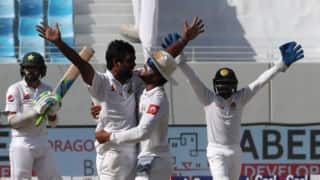 PCB offers to host Sri Lanka for Tests in Pakistan