Taylor missed the second Test against India to witness the birth of his second child.

New Zealand batsman Ross Taylor, who skipped the ongoing second cricket Test against India to be with his expecting wife, was blessed with a son.

Taylor also took time out to keep tabs on the ongoing match and tweeted his delight after skipper Brendon McCullum (281 not out) and B J Watling (124) steered New Zealand to a position of strength by wiping off a massive 246-run deficit.

From what seemed like a lost cause, the Kiwis are now in firm command having taken a 325-run lead so far.

“Woohoo. Baz and BJ. Nice to wake up to that news.

Awesome fight. One of a greatest ever partnership in #Blackcaps history. #Records #naps,” he said referring to their world record 352-run sixth-wicket partnership.

They already have a daughter, Mackenzie. 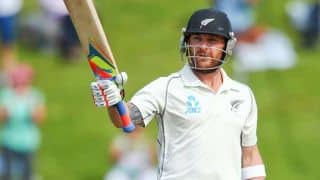