James Neesham has been named in the New Zealand squad.

New Zealand batsman Ross Taylor has reportedly been ruled out of the second Test against India, starting on Friday, as his wife has still not given birth to their second child, who is expected to arrive during the Test.

New Zealand Cricket (NZC) also confirmed the debuts of batsman Tom Latham and all-rounder James Neesham in the match, to be held in Wellington.

According to Stuff.co.nz, Taylor remained at home in Hamilton and Latham was informed that he was included in the squad at No 4 in the batting order in a straight swap for Taylor as New Zealand look to clinch the series after a 40-run win in the first Test in Auckland.

The report also said that Neesham, who is coming off his highest First-Class score, was also named in the playing eleven, with the Basin pitch looking green and seamer friendly, which means that five frontline pacemen for New Zealand, with legspinner Ish Sodhi to carry the drinks and Kane Williamson chiming in with his off spin if required.

Neesham has played 11 ODIs for New Zealand while Latham has 13 One Day Internationals (ODIs) to his name and forced his way into Test contention with plenty of First-class runs this winter, the report added. 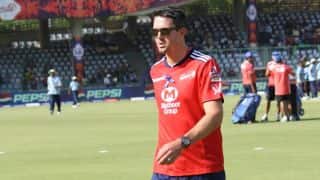 Kevin Pietersen happy to play for Delhi Daredevils in IPL 7