Kane Williamson and Ross Taylor posted a good partnership after a bad start.

New Zealand have posted a challenging total of 303 for four against Zimbabwe in the first innings of the first One-Day International (ODI) at Harare. The total is impressive because the pitch was tricky to bat on, especially for New Zealanders who are used to playing with tracks with a lot more bounce on them. The ball never really came on the bat today, but the batsmen fought and in the end posted a total that could well be outside Zimbabwe’s reach. Kane Williamson and Ross Taylor were the stars of the innings. LIVE BLOG: Zimbabwe vs New Zealand 2015, 1st ODI at Harare

Skipper Williamson got 97 runs on the board and was looking really fluent but chopped on to Panyangara three short of what could have been his eighth ODI hundred. He and Taylor put in a solid partnership in the middle after the openers, Martin Guptill and Tom Latham, fell cheaply. Guptill was the first to get out and didn’t get a lot of time to set his eye in. Latham got a good start but failed to convert it into a bigger knock. ALSO READ: New Zealand play as Aotearoa in honour of Maori heritage

Williamson and Taylor were both very cautious early on, but Williamson accelerated as his innings progressed to take the game in his hold. After he was dismissed, Grant Elliott walked in and played quite well. Elliott got measure of the pitch pretty fast and hit a few good shots. He was unfortunate to get run out while on 43 off 32 deliveries. Zimbabwe vs New Zealand 2015, Live Cricket Score: 1st ODI at Harare

Taylor then came into his own and played till the very end. He took the helm from there on and went on to score his fourth ODI hundred in this year. Still, the Zimbabweans kept their nerve and continued to ask questions. There was a good mix of wide yorkers, slower balls and short balls that kept the batsmen thinking. Tinashe Panyangara was the pick of the bowlers.

Panyangara not only got the vital wickets of Guptill and Williamson but also kept it quite tight. Chamu Chibhabha also bowled really well Among the slower bowlers, Graeme Cremer did a good job in the middle overs, but apart from these the other bowlers didn’t do a good job at all which allowed New Zealand to get past the 300-run mark. 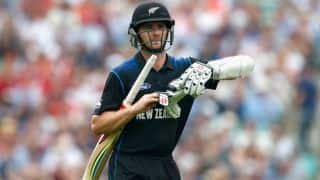 Kane Williamson dismissed 3 short of hundred, during 1st ODI against Zimabwe at Harare 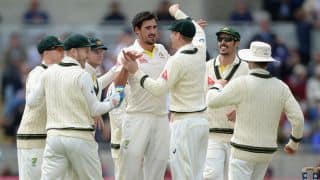