RCB and RPS have faced each other twice and RCB have emerged victorious on both occasions.

Royal Challengers Bangalore (RCB) go toe-to-toe against Rising Pune Supergiant (RPS) in Match 17 of the Indian Premier League (IPL) 2017 at M Chinnaswamy Stadium, Bengaluru. Both RCB and RPS desperately need a win in this match as they have already lost three out of their four matches. RCB received a major boost in the previous match against Mumbai Indians (MI) as Virat Kohli was back in action with a brilliant fifty. However despite Kohli s performance and Samuel Badree s hat-trick, RCB lost the match by 4 wickets, thanks to Kieron Pollard s 47-ball 70. RPS, on the other hand, put up an impressive show against MI in their first match, but have lost their next three matches to Kings XI Punjab (KXIP), Delhi Daredevils and most recently to Gujarat Lions (GL). LIVE CRICKET SCORECARD, Royal Challengers Bangalore vs Rising Pune Supergiant – Match 17

RCB are known for their explosive batting line-up, but have not been able to put up those big totals on the board. They did score 172 in their first match against Sunrisers Hyderabad (SRH), yet fell 35 runs short. After that, Royal Challengers Bangalore have scored just 157, 148 and 142 due to which they have often struggled. RCB batsmen need to fire in this game. In the bowling department, bringing in Badree has turned out to be the right move for RCB, but perhaps RCB s line-up could have further strengthened had Shane Watson been selected in place of Tymal Mills. Watson not only can play those big shots, but can also chip in with a few useful overs.

Mills, in his four matches, has picked up just 3 wickets and has conceded runs at 8.81 an over. Chris Gayle too is not firing at the top of the batting line-up and the West Indian has to come good in this match, if he were to retain his place. Gayle has scored just 60 from his three innings so far. RCB also have Travis Head, if they decide to drop Gayle. However, the combination of Kohli and Gayle at the top has proven to be very effective in the past and RCB will hope that the duo is back to its best.

Pawan Negi bowled an excellent final over against Delhi Daredevils (DD) to hand RCB the win. However, Iqbal Abdulla is certainly the better bowler between the two. Abdulla can also play a little cameo lower down the order, like he did against Gujarat Lions (GL) in a crunch game last year. Negi could as a result make way for Abdulla in this match.

Mandeep Singh batted at No. 6 in the previous match and was dismissed for a golden duck, it would certainly benefit the team if he played at No. 4, just after de Villiers. An on song Mandeep can be a threat on his day.

RPS suffered a drubbing at the hands of DD, but in the other matches, they have managed to get just par scores. Rising Pune Supergiant are yet to win a single match in the IPL after batting first. Their bowlers have often let them down as well. Imran Tahir has been RPS star player. Barring a drubbing he took in the previous match against GL, Tahir has been RPS only face-saving performer, barring skipper Steven Smith. Some of the big guns like MS Dhoni have more often than not failed to get big scores, which has hurt RPS.

Smith should perhaps rethink his batting order. While asking Stokes to bat at No. 4 seemed like a positive move, in the interest of the team, it should be Dhoni batting in that position. Dhoni, no doubt, can be a destructor-in-chief in the final stages of the innings. At No. 4 Dhoni can play those big hits once he gets his eye in. Smith did well recently to come in defense of the former RPS captain, who has been struggling for runs in this IPL.

RPS made quite a few changes in the previous game. However, Rising Pune Supergiant need batsmen to play a little more than just cameos. One of the batsmen in the top-order must look to get a big score and if possible, bat through the innings once set. That would surely add 15 to 20 runs more to the total, which is perhaps what they have fallen short by in their losses to KXIP and GL.

All the players in the previous match showed a lot of promise. It would not be fair on the players, if they were dropped based on their performance in just one match. The form of Ajinkya Rahane is a concern, but RPS will hope that he comes good in this match. Lockie Ferguson impressed everyone with his pace on his IPL debut, but RPS might prefer going in with Dan Christian for this match. At his pace, it will be easy for the batsmen, especially at the M Chinnaswamy to hoist him over the fence.

It will not be a wrong idea to play an extra batsman in place of Ferguson as well. Usman Khawaja in that case can give the RPS batting order a major boost. He could be the player, who gives them those extra 15-20 runs that they have been missing.

Head-to-head: RCB and RPS have faced each other twice and RCB have emerged victorious on both occasions. This also implies that RCB have won the only game these two sides played at the M Chinnaswamy Stadium. Kohli will have fond memories of playing against RPS. He scored an unbeaten 108 when the teams last met to guide RCB to a 7-wicket win at the Chinnaswamy Stadium. Kohli, in his two innings against RPS, has scored 80 and 108 not out.

Prediction: RPS will still be hurting from their crushing losses in the previous two games. With Kohli back for RCB and scoring runs, they will certainly start favourites. However, there is very little doubt that RPS will go into the match all guns blazing. With both sides struggling in the bowling department, the team with the most disciplined bowling performance will win. 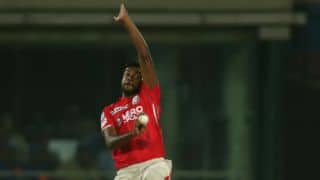 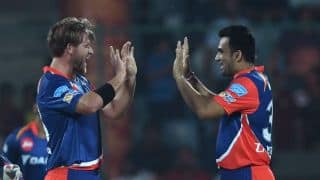