A must-win for Royal Challengers Bangalore but a win for Mumbai Indians will put them in the driver’s seat once again to finish in the top 4 of Indian Premier League 2016.

Royal Challengers Bangalore (RCB) take on Mumbai Indians (MI) in match 41 of the Indian Premier League (IPL) 2016 at M Chinnaswamy stadium, Bangalore. A win for RCB will take them on level on points with MI at 10. RCB, however are the ones with the better net run rate. For the very first time in this edition, RCB are going into this match with back-to-back wins under their belt while still remaining in contention to make it to the playoffs stage. Their previous win came against Kings XI Punjab (KXIP) in a nail-biting one-run victory. MI on the other hand got bowled out for a mere 92, chasing 177 against Sunrisers Hyderabad (SRH). The game would have been a wake-up call for the MI batsmen and will look to put in an improved show with the bat against RCB. Full Scorecard: Royal Challengers Bangalore vs Mumbai Indians, IPL 2016, Match 41 at Bangalore

RCB would be delighted to have AB de Villiers back in form. He scored a crucial fifty against KXIP when his team were in slight trouble. Virat Kohli had a rare failure, but KL Rahul, Sachin Baby along with de Villiers ensured that RCB got enough runs on the board. Barring Chris Jordan, RCB bowlers did a fairly decent job. Jordan gave away 52 runs in his four overs and was ordinary in the earlier match against Rising Pune Supergiants (RPS) as well. He may not find a place in this match with Kane Richardson regaining his place.

Shane Watson has been brilliant with the ball and has the ability to hit a few big ones, coming in at No. 4. By the looks of it, Chris Gayle will continue to stay out as RCB seem to be getting their balance just about right. Leggie Yuzvendra Chahal too has had a good tournament for RCB.

As far as MI are concerned, they will be eyeing the relatively weak bowling attack of RCB. Regardless, their batsmen need to fire all guns, as they know that the RCB batsmen would be up for the challenge when they have the bat in hand. Tim Southee and even Jasprit Bumah have not been in great form in the tournament. It will not be a bad idea to bring Jerome Taylor in place of Southee in this match. Taylor was brought in as a replacement for the injured Lasith Malinga, but continues to warm the bench for the defending champions.

Harbhajan Singh was the only positive with bat and ball in the previous game and MI will hope that he continues to contribute.  MI have world class batsmen at the top. Parthiv Patel and Rohit Sharma along with Ambati Rayudu and Jos Buttler have done the bulk of the scoring for them. Then they have the likes of Krunal Pandya, his brother Hardik, Kieron Pollard and even Harbhajan, who can also make valuable contributions lower down the order.

Mitchell McClenaghan has been the man in form for them with the ball. He will have his task cut out when it comes to restricting the in-form RCB batsmen. MI do not need to make too many changes despite their demoralizing loss.

Chinnaswamy is a small stadium and it will be sixes galore. The chasing teams have done well, although three out of four wins for RCB have come while batting first. MI will surely no want someone of the caliber of Virat Kohli to chase a total and hence will be happy to field first if they win the toss.

Every match from now is a must-win for RCB but a win for MI will put them in the driver’s seat once again to finish in the top 4. RCB will look to continue their winnings run, but MI will want to bounce back after a thrashing they suffered against SRH in the earlier tie. 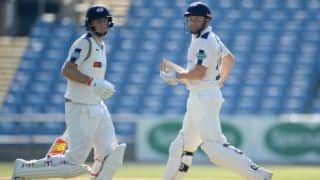