Rashid Khan gave SRH their first breakthrough as he dismissed Liam Livingstone. The right-hander, who put up a 78-run opening stand with Ajinkya Rahane, scored 44 off 26 balls before being castled in the 10th over.

However, the two quick wickets did not really help the matters as RR continued to score at good pace as Siddarth Kaul, who had gone for 30 runs in his two overs, continued to leak runs. Sanju Samson hit the Indian pacer for two fours in the 13th over as RR scored 14 runs from the over to move past 110-run mark.

Earlier in chase, RR scored only 8 runs from the first two overs. But the things started to move as Rahane opened his shoulder to hit Bhuvneshwar Kumar for two fours in the third over. RR scored 10 from the third over before Livingstone and Rahane took on Rashid Khan in the next over.

The RR openers scored 16 runs from Rashid s first over, hitting a six each, and RR moved past 30, enjoying a bright start in the chase.

Khaleel Ahmed, who bowled the fifth over of the innings, started on a good note as the left-arm pacer conceded only six runs from his first over as RR were 40/0 after the first five overs.

However, Siddarth Kaul s first over and the final over of the powerplay went for a plenty as Livingstone took apart the Indian pacer as RR scored 20 runs from the over, with Livingstone hitting two sixes and as many fours as RR hammered sixty runs in the powerplay. 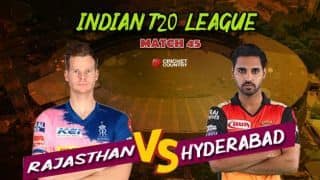