Needing 161 runs to win, Rajasthan Royals (RR) were off to a flying start against Sunrisers Hyderabad (SRH) in the powerplay of the 45th match of the Indian Premier League (IPL) 2019 at the Sawai Mansingh Stadium in Jaipur on Saturday. The hometeam scored 60 runs in the first six overs, without losing a wicket.

Ajinkya Rahane and Liam Livingstone, who was picked in the playing XI after Jos Buttler s return to England, opened the innings for RR.

While RR scored only 8 runs from the first two overs, Rahane was the first one to open his shoulder as the ex-RR skipper hit Bhuvneshwar Kumar for two fours in the third over. RR scored 10 from the third over before Livingstone and Rahane took on Rashid Khan in the next over.

The RR openers scored 16 runs from Rashid s first over, hitting a six each, and RR moved past 30, enjoying a bright start in the chase.

Khaleel Ahmed, who bowled the fifth over of the innings, started on a good note as the left-arm pacer conceded only six runs from his first over as RR were 40/0 after the first five overs.

However, Siddarth Kaul’s first over and the final over of the powerplay went for a plenty as Livingstone took apart the Indian pacer as RR scored 20 runs from the over, with Livingstone hitting two sixes and as many fours as RR hammered sixty runs in the powerplay. While Rahane scored 28, Livingstone scored 32 runs from 17 balls. 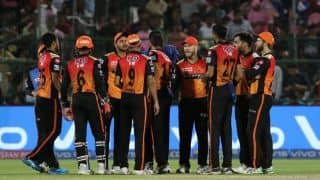