Samson continued his dream run with a superb 42-ball 85, while captain Smith also contributed a 27-ball 50 as Royals continued their winning run.

Rahul Tewatia struck five sixes in an over at the fag end of the match as Rajasthan Royals recorded the highest run-chase in Indian Premier League history, beating Kings XI Punjab by four wickets in a high-scoring encounter in Sharjah on Sunday. Chasing a mammoth target of 224 for the win, the Royals needed 51 runs from the last three overs and it seemed the fate of the match was already sealed but Tewatia turned the match on its head in a dramatic fashion, taking 30 runs from Sheldon Cottrell in the 18th over. (SCORECARD)

In an unbelievable turn of events, Tewatia (53 of 31 balls and 7 sixes), who was struggling to connect the ball after being pushed up the order ahead of the likes of Robin Uthappa, suddenly shifted gears as he hoisted Cottrell for a series of sixes much to the amazement of his teammates and opposition players. (MATCH HIGHLIGHTS)

He was finally out in the last ball of the 19th over and after that Jofra Archer (13 not out) and Tom Curran (4 not out) took the Royals home. It was the highest successful run-chase in IPL history, bettering the earlier record which also belongs to Royals, who had hit 217 while chasing 215 against erstwhile Deccan Chargers in 2008.

Sanju Samson continued his dream run with a superb 42-ball 85, while captain Steve Smith also contributed a 27-ball 50 as RR continued their winning run. Star England batsman Jos Buttler (4), who missed Royal’s first match as he was in quarantine, lasted just seven runs with Cotrell dismissing him in the third over.

But Samson was in a different level altogether as he kept on plundering the fours and sixes. He collected 21 runs off Glenn Maxwell in the 16th over before Mohammed Shami had him dismissed in the first ball of the next over.

Earlier, opener Mayank Agarwal outshone his captain Rahul with a maiden IPL hundred as the duo pummelled the Royals bowlers into submission to post the highest total of this season so far.

Agarwal and Rahul’s 183-run stand for the opening stand was the highest partnership for any wicket so far this season as they took apart the Royals bowlers who were also wayward in their line and length.

The duo just missed the record of highest opening wicket partnership in IPL history by a mere two runs when Agarwal was out in the 17th over after hitting 10 fours and seven sixes during his magnificent 50-ball knock.

Nicholas Pooran then hit 25 not out from just eight balls while Glenn Maxwell also remained unbeaten on 13.

Rahul was content to playing second fiddle to Agarwal though the KXIP captain also made some brilliant shots during his 54-ball knock studded with seven fours and a six, continuing his rich vein of form after his 132 not out against Royal Challengers Bangalore.

Agarwal surged ahead of his captain by reaching his fifty (from 26 balls) in style with a six off Shreyas Gopal and followed it up with another maximum to bring up KXIP’s 100 in the ninth over.

KXIP reached 110 at the halfway mark.

The Royals bowlers had no clue how to deal with the marauding opening duo. Only Ankit Rajpoot conceded less than 10 runs an over. 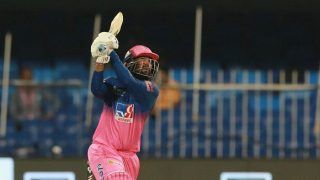 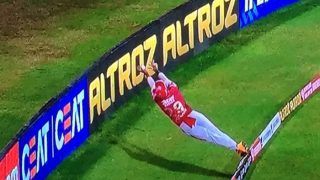