Dhaka: Injured Bangladesh fast bowler Rubel Hossain is gearing up for a return to his national team fold resuming responsibilities as its main strike bowler against India in an upcoming series.

India will play a Test and three One-Day Internationals (ODI) from June 10 to 24 away at Bangladesh. India defeated Bangladesh in a World Cup quarter-final clash in March. READ: India tour of Bangladesh 2015: BCB announce preliminary squad

Hossain suffered a Grade 1 left side strain prior to the second Test against Pakistan earlier this month, which according to the team physio Bayjedul Islam would have taken three to four weeks to recover, a Bangladesh Cricket Board (BCB) statement said on Tuesday.

Hossain has undergone three weeks of intense rehabilitation process since his injury and has started bowling at practice with a shorter run-up. READ: Mushfiqur Rahim to continue Bangladesh skipper, says BCB President

Hossain had an excellent World Cup campaign as Bangladesh’s main strike bowler and has been their bowling spearhead for a while, particularly in the shorter formats of the game of Cricket.

Bangladesh would hope he is able to regain full fitness before the Test match against India, beginning on June 10. READ: India tour of Bangladesh 2015: Expect monsoon to play spoilsport

The aggressive quickie would have an opportunity to get some competitive match-practice if he plays in the final round of the third Bangladesh Cricket League (BCL) competition, starting May 24.

Rubel has been named among the 23 players that compose the Bangladesh preliminary squad for the India tour. 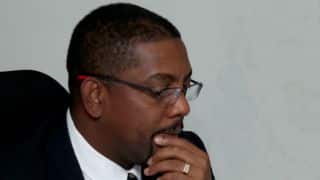