The mishap occurred in the Bangladesh team hotel in Birmingham on June 15 after the semi-final loss to India in the ICC Champions Trophy 2017.

Bangladeshi fast bowler Rubel Hossain has been ruled out of competition for at least a month after colliding with a door and breaking his jaw while on tour in England, his doctor said Wednesday. The mishap occurred in the Bangladesh team hotel in Birmingham on June 15 after the semi-final loss to India in the ICC Champions Trophy 2017. Bangladesh Cricket Board (BCB) physician Monirul Amin said Rubel underwent surgery Wednesday and would need four to six weeks off to recover. ALSO READ: Bangladeshi commits suicide post India’s debacle against Pakistan in final

We hope he will be fine after that period, and make himself available for selection for the Australia series, Amin told AFP, referring to the first of two Tests starting late August. Rubel featured in all four of Bangladesh’s Champions Trophy matches but claimed just two wickets at an average of 95.50. Bangladesh progressed to the semi-final of the 50-over tournament for the first time in their history, but were crushed by India in a nine-wicket thumping.

Bangladesh lost to England in the tournament opener and were lucky to escape with a point in the next match against Australia. The rain gave them a point and Bangladesh capitalised on the same and went on to beat New Zealand at Cardiff to qualify for the semi-final.

Bangladesh are expecting Australia to tour them in August and Rubel is expected to be fit to press for selection. He has played 24 Tests and claimed 32 wickets at 77.93. His numbers read better in limited-overs. He has 93 wickets at 35.19 in ODIs and 14 T20I wickets from as many games at 30.28. 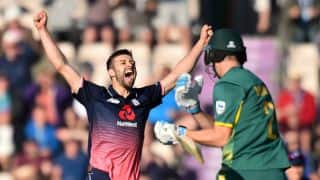