It was the biggest knock of his nascent international career but far from celebrating, young West Indies pacer Andre Russell was a disappointed man as his hurricane 92 failed to fetch his side a win in the third one-dayer against India. It was the biggest knock of his nascent international career but far from celebrating, young West Indies pacer Andre Russell was a disappointed man as his hurricane 92 failed to fetch his side a win in the third one-dayer against India.

Russell got a Man of the Match award in only his sixth one-day international but rued the missed opportunities in yesterday’s three-wicket loss which gave India an unassailable 3-0 lead in the five-match series.

“We couldn’t keep pressure on Harbhajan Singh. You needed to bowl him in areas to keep him under pressure. Unfortunately we couldn’t do so,” remarked Russell after Harbhajan (41) and Rohit Sharma (86 not out) forged a match-winning stand of 88 runs for the seventh wicket.

But much before that, the 23-year-old Russell, who has the potential to be a bowling all-rounder for West Indies, had done magnificent job to lift his side from 96 for seven to 225 for eight with an unbeaten 92 off a mere 65 balls.

His blazing knock comprised eight fours and five sixes, one of which cleared the huge ground completely.

“One more over and it could have been 100. I am always in a positive frame of mind. I knew if we get set, we could build a stand,” he said.

Russell and Carlton Baugh (36) put on 78 runs for the eighth wicket for West Indies after they were reduced to 96 for 7.

“This knock is very important as it came against a top side like India. I got my opportunity and grabbed it,” said Russell who wasn’t picked in the eleven for first two one-day internationals. I got a lot of time to settle myself in. I stuck to the task. As always, I was positive,” added Russell, who once hit 108 off 65 balls against Ireland, playing for a Jamaica side.

Russell termed it a good toss to win as the wicket became easier to bat later on in the day.

Russell once represented Jamaica in under-17 football as a goalkeeper. He has also been a good 100m sprinter. He was picked out of blue by West Indian coach Ottis Gibson, who was very impressed by his domination of club cricket in Jamaica.

Meanwhile, a disappointed West Indies captain Darren Sammy blamed the lack of “killer instinct” as one of the reasons for the team not being able to win despite reducing India to 92 for six.

“It is a game that got away from us. Russell brought us back along with Baugh. Our guys were confident during lunch, but we lacked the killer instinct after taking early wickets,” Sammy stated.

He admitted that the batsmen haven’t been performing upto the mark and he expected a bit more from fast bowler Kemar Roach.

“We have not been getting runs at the top. We just lacked the finishing touch. About our bowling, Kemar is one of our strike bowlers and we needed a bit extra from him. But I can’t fault anyone, he has been doing a good job over the past months. If you put the ball in the right areas, you could reap rewards on this wicket.” 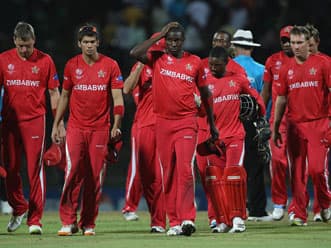 Zimbabwe to tour New Zealand in 2012