Calling for more consistency from South Africa, coach Russell Domingo has admitted his side still have a great deal of work to do, beginning with batting.

Johannesburg: Calling for more consistency from South Africa, coach Russell Domingo has admitted his side still have a great deal of work to do, beginning with batting, despite clinching their third successive series triumph in Australia recently. South Africa lost their maiden day-night Test at the Adelaide Oval by seven wickets, but they sealed the three-match series against Australia 2-1 after registering massive wins in the first two games in Brisbane and Hobart. It was under Domingo’s watch that South Africa had slipped from No. 1 to No. 7 on the Test rankings last summer, but they have now begun to climb and are placed at the fifth spot currently. FULL CRICKET SCORECARD: Australia vs South Africa, 3rd Test at Adelaide

We haven’t had players in a consistent run of form. A guy like Quinton de Kock is the one guy who has contributed in just about every single game over the last couple of months. Other guys have sporadically performed, ESPNcricinfo quoted Domingo as saying. With AB de Villiers likely to be fit for the upcoming Sri Lanka series, Faf du Plessis or JP Duminy look likeliest to miss out to make room for the regular skipper. Although Domingo did not seem to make knee-jerk changes in the batting order, he admitted that South Africa do have a plenty of problems. Russell Domingo’s South Africa head coach contract extended until August 2017

“We’re a pretty settled batting line-up. Rilee Rossouw has been around the squad for a period of time. He has been here and he’s the next batsman in as far as we’re concerned, but you’ve got to be fair to players. I know a lot of people might have been questioning Stephen Cook, but you’ve got to give him an opportunity. It was a similar thing we did with Stiaan van Zyl. You can’t just play him for two or three games, and if he’s not in form, you get rid of the guy. So, you’ve got to give guys an extended run to find some form, particularly when you’ve got belief in them, he said. Faf du Plessis wants more pink-ball Tests

Domingo reiterated that de Villiers would continue to remain their commander-in-chief despite South Africa s recent success under du Plessis. “As far as I know, the status quo will remain – AB de Villiers is the guy that’s in charge, and once fit, he will come back into the side,” Domingo said of de Villiers, who has been out of action for past month due to elbow injury.

Describing du Plessis as a `team-focused` person, the coach admitted the player had done an outstanding job in the last couple of weeks. “Faf has been outstanding. The team has supported him throughout. He’s a very team-focused person, he’s a very self-driven person and he has done an outstanding job over the last couple of weeks. I think everybody in the change room is very proud of what he has achieved, he said. South Africa will aim for another series win when they host Sri Lanka for three Tests beginning on December 26 at the St George’s Oval in Port Elizabeth. 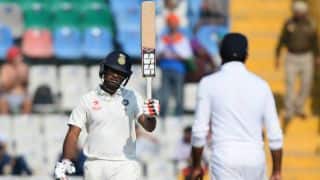 Ravindra Jadeja: I don't consider myself as a batsman, I am a batsman