All-rounder Andre Russell brought up the rear with a magnificent unbeaten 92 as West Indies managed 225 for eight against India after being reduced to 96 for seven at one stage, in the third One-Day International. 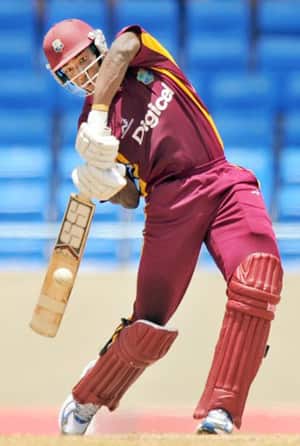 Andre Russell in action during his innings of 92 AFP

All-rounder Andre Russell brought up the rear with a magnificent unbeaten 92 as West Indies managed 225 for eight against India after being reduced to 96 for seven at one stage, in the third One-Day International.

However in the next 14.5 overs, the home team lost as many as six wickets for addition of only 31 runs as they tottered at 96 for seven.

Russell and Baugh (36, 73 balls) then batted sensibly adding 78 runs for the eighth wicket in 15.5 overs as Indian bowlers failed to polish off the tail. Russell repeatedly carted the spinners all over the park including 22 runs from the penultimate over bowled by skipper Suresh Raina.

The home team skipper Darren Sammy after his team’s defeat in the first two matches has urged the batsman to up the ante but all they dished out was yet another miserable show with the willow.

Once Sarwan was run-out as he lost his bat failing to make his ground, Mishra took over as he rocked the middle-order.

Simmons called Sarwan for a sharp single after pushing one down to short square leg. Sarwan was slow to get off the blocks and Raina charged from midwicket to sent in a sharp return to keeper Parthiv Patel. A desperate Sarwan tried to slide in his bat in but it got stuck in the ground and he lost the grip to fall short.

Sarwan looked fluent during his short stay. He came to the crease in the second over at the dismissal of opener Kirk Edwards (0) for nought.

After an initial settling period, Sarwan glanced Praveen Kumar to fine leg fence for his first boundary in the sixth over. He then launched into Mishra, hitting him straight down the ground for a six and thrashed Munaf for an off-side four in the next over.

But his dismissal shell-shocked the hosts and galvanized the tourists to the extent that the entire innings came off the wheels in the next few overs.

Mishra built on this breakthrough with three wickets off successive overs.

He first had Marlon Samuels (1) feel for a delivery outside his off stump to be out stumped and then sent down a googly which Danza Hyatt (1) mistook for a leg-break and was bowled off an inside edge.

Simmons (45) went trying to play a forward defensive prod only to find leg break turn enough to get an edge to Kohli at first slip.

It brought Kieron Pollard to the crease in the 25th over. The T20 specialist scratched around for 16 balls for his 6 runs before being caught behind off Harbhajan Singh.

He gave full vent to his displeasure at the decision and took ages to get off the ground.

Munaf then obliged with the wicket of skipper Darren Sammy in the 30th over as he edged one behind the stumps. West Indies were reeling at 96 for 7.

But it was Russell who stole the show with his career-best knock as the final three overs of the West Indies innings yielded 47 runs.

Indian skipper Raina erred in introducing his fifth bowler till the 31st over, a decision which yielded 65 runs from 10 overs bowled by Yusuf Pathan, Virat Kohli and Raina.

Baugh and Russell made a meal out of part-time spinners as Pathan was hit for two successive sixes in the 40th over by the latter over midwicket.

Finally, Munaf broke the stand in the 46th over when Baugh lifted one into the covers for Shikhar Dhawan to take the simplest of catches.

Russell completed his half century in the 47th over with a single off Raina. Along with Kemar Roach (7 not out), Russell added another 51 runs in 4.4 overs for the unroken ninth wicket stand.

KCA to explain allegations of "non-co-operation" to BCCI

India stumble in chase of 226