Russell bowled a fiery spell which read 3-1-4-2, and triggered a Pakistan collapse of 7 for 43.

NOTTINGHAM: Not holding back his disappointment, Pakistan captain Sarfraz Ahmed admitted that his side was outplayed by the West Indies and cited the particular spell from Andre Russell as the point which turned the game on its head. Pakistan were 35 for 1 when Russell was handed the ball and the allrounder made little time to make an impact.

“Pressure was built when we lost our first wicket in the fourth over,” Sarfaraz said. “His [Russell’s] spell was the turning point. He took two wickets and that put us on the back foot [immediately].”

Bowling the fourth over, Russell first sent down a bouncer, to which Fakhar Zaman played on and followed it with the wicket of Haris Sohail, also through a short delivery. It triggered a collapse which saw Pakistan lose their final seven wickets for 43 runs. Russell bowled a fiery spell which read 3-1-4-2. He went off the field with some discomfort in his left leg and never came back to bowl, but the damage was already done. West Indies then made short work of the target and chased down 106 with seven wickets remaining in a match that roughly lasted three hours.

“First ten overs we lost too many wickets, and that’s why we could not come back into the game,” Sarfaraz said. “We were aware of the West Indies fast bowlers, and that they bowl 90-plus [mph]. We had practised a lot [against that kind of bowling]. It is just that in the first ten overs, our shot selection was not good and we lost wickets. If we had managed to survive that phase then probably the situation could have been different.”

Some of the shots Pakistan batsmen was questionable. In overcast conditions, the players seemed to throw their bat at whatever was offered, which against the pacey attack might not have been the best of ploys. Sarfraz, who lost the toss, pointed out he would have loved to bowl first and mentioned how it wasn’t the typical Nottingham surface to play on.

“In the first 90 minutes in England, in overcast conditions, it helps the bowling,” he said. “The behaviour of the pitch in Nottingham was slightly different today. Usually the ball comes nicely on to the bat on the Nottingham pitch, but if you noticed today in the latter half of the match, the ball was gripping the surface. The first two wickets were soft: Imam was caught behind on the legside and unfortunately Fakhar got out after the ball hit his helmet and then rolled onto the stumps.

“We have to play good cricket. In overcast conditions where you bat first, we have to try and not lose early wickets. Then we can play better.”

The defeat means that Pakistan have now lost their last 11 straight matches and start off their World Cup campaign with a defeat. In a format like this year’s World Cup, it might be too early for Pakistan to press the panic button, but a defeat this early in the tournament ought to serve as a timely reminder.

“I think first we have to back ourselves and not think too much about what happened today. That match is gone, so inshallah we have the type of players who can win the next match for us. Inshallah we will bounce back in the next matches,” said Sarfraz. “I think we expected the hard game that was coming to us but we knew we have what it takes to play and win. But we lost so many wickets up front when we were batting because of those couple of short balls. The result was not good.”

As for the bowling, Sarfraz was pleased with the way Pakistan responded in defence of a small total with Mohammad Amir’s three-wicket burst giving the side some hope early in the innings. Amir’s deserted form and lack of wickets has been a major point of concern for Pakistan and his figures of 3 for 26 from six overs couldn’t have come at a better time.

“We definitely bowled well. From our bowlers, it was good to have Mohammad Amir back in the form we know he is capable of and it will be good for us for the next matches as well,” said Sarfraz. 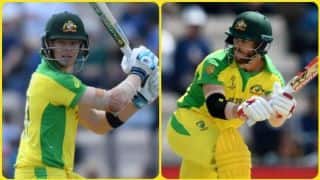