Led by Ryan ten Doeschate s brilliant 119, Netherlands launched a stunning assault on a shabby England, who offered too many loose balls down the leg side and who s fielding left much to be desired. 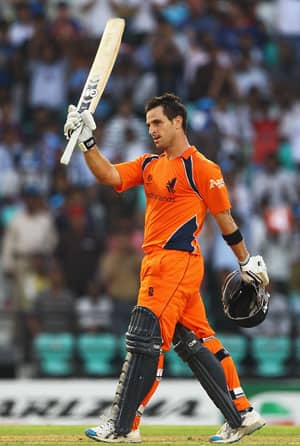 The first and most important World Cup century by an Associate nation batsman since Canada s John Davison stunned West Indies in 2003 resulted in Netherlands posting 292 against England in Nagpur. Fifteen years ago to the day, Netherlands posted their highest score against a Test Nation 230 against England. Today, they went pass that and then some.

Led by Ryan ten Doeschate s brilliant 119, Netherlands launched a stunning assault on a shabby England, who offered too many loose balls down the leg side and who s fielding left much to be desired. Dropped on 47, ten Doeschate made England pay with an outstanding innings; Netherlands scored 121 in the final 15 overs and England have much work to do.

The tone for England s performance was set very early on. James Anderson s first spell was erratic and Stuart Broad on the back of consecutive five-wicket hauls in the warm-up matches served up two maidens as well as a 13-run over. Alexei Kervezee and Wesley Barresi were harsh on anything down the leg side, though it was Tim Bresnan who struck first when Kervezee gloved a short ball down the leg side. The freebies on the pads continued as Tom Cooper clipped four off his toes first ball, and throughout the innings England s fielders were kept busy in the region between deep square leg and fine leg.

The boundaries came far too easily for Barresi and Cooper as Andrew Strauss enjoyed little control over the proceedings and Netherlands half-century came up with barely a close appeal from the bowlers. Barresi and Cooper took Netherlands to 57 for one after 11 overs before a loose forward prod resulted a swift stumping by Matt Prior. Once again, it was Graeme Swann who struck in his first over.

All it needed was someone to partner ten Doeschate and offer him strike, and Cooper succeeded. The pair ticked off singles with the odd poached boundary Paul Collingwood and Kevin Pietersen were each taken for east boundaries as Netherlands prospered. Being instinctively aggressive, ten Doeschate went for his shots and, despite the loss of the openers, promptly dealt with anything pitched up or dropped short.

When England did manage to break through, it was with Cooper turning Collingwood straight to short midwicket. England had another opportunity at 145 for three, but they squandered it. Ten Doeschate charged Swann and miscued a lofted on-drive, only to look on as Anderson and Pietersen ran in and failed to call for the skier. Ten Doeschate was on 47 then, and duly raised his fifty off 59 balls in the same over.

Tom de Grooth continued the good work started by Cooper, pulling off some meaty shots while taking the pressure off ten Doeschate. Ten Doeschate breezed through the sixties and seventies, smashing Collingwood for six and fiercely pulling Anderson for four, and it was a measure of the ease with which he was batting that he had enough time to hang on the back foot and repeatedly collect runs to the leg side.

With ten Doeschate going well on 84 after a five-over block where 38 runs were scored – Netherlands opted for the batting Powerplay at 209 for four. A 64-run partnership had put Netherlands on course, but there was worse to come for England.

The nineties were a blur for ten Doeschate as he collected fours off Bresnan and reached three figures off 98 balls, courtesy overthrows. Netherlands looted 50 off the batting Powerplay, losing just one wicket, and ransacked 53 off the final five. Ten Doeschate hit nicely between mid-on and midwicket, and Borren (35*) added his worth, as Netherlands capped off an impressive batting performance.

England completely lost the plot in the last few overs. Anderson served up full tosses and short balls, let balls flies past outstretched hands, Swann dropped a catch, and the worst was when Broad bowled Borren only to see the umpires recall the Netherlands captain because there were only three fielders inside the circle. It was shockingly ordinary cricket from England.

Ten out of ten for Doeschate; makes a case for minnows in World Cup