Disgraced India cricketer Shanthakumaran Sreesanth lost his temper and walked out of Jhalak Dikhhla Jaa sets when judges didn’t give him a thumbs up on his performance during the elimination round, where he was competing against telly star Puja Banerjee.

According to a report in MiD-Day, judges were not impressed with his performance and when one of the judges gave negative feedback, he replied back stating that it was his best performance.

“Sreesanth was supposed to perform a little later but the crew decided to shoot his act first as they wanted to complete the elimination procedure and he was in the face-off round along with Puja Banerjee. But it turns out that he was not prepared for this change of plan and he was annoyed that he had to shoot earlier on. He finished shooting his portion but it was clear that he was not keen to complete his act,” a source said.

“Remo D’Souza said that it wasn’t his best performance but Sreesanth shot back that he had given it his best. Madhuri too said that this was not a great act. He again showed his displeasure over this, and Karan Johar too lost his cool. But KJo didn’t say anything as he didn’t want things to get ugly. After this, Sreesanth just walked out of the sets. The production team tried to convince him to return to the show, as he was supposed to sit through the rest of the performances. But he left the venue in a huff,” the report added. 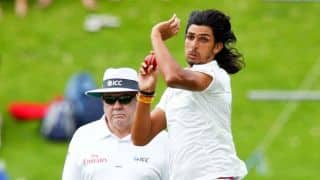