Pacers James Anderson and Mark Wood return from injuries while keeper Jonny Bairstow makes a return having been dropped for the New Zealand tour.

England’s veteran fast bowler James Anderson has been included in the 17-member Test squad for South Africa tour, named by ECB on Saturday. After recovering from a calf injury, this will be Anderson’s first outing in competitive cricket after nearly a gap of three months.

Along with Anderson, pacer Mark Wood and wicketkeeper Jonny Bairstow have also been named in the England squad for the four-Test series.

The 37-year-old Anderson, England’s all-time leading wicket-taker, last featured during much-hyped Ashes series against Australia. Anderson’s involvement limited to the first Ashes Test at Edgbaston where he bowled only four overs before limping off the ground.

Meanwhile, keeper Bairstow, who has played 69 Tests, was left out of the recent Test tour of New Zealand but was named in the 17-man squad.

James Anderson, Mark Wood and Jonny Bairstow have all returned to the England squad for South Africa, but no place for Saqib Mahmood or Moeen Ali.

Who else is looking forward to the return of this man? 👇 pic.twitter.com/iIeD43aMia

Fast bowler Wood is also back in the fold after sitting out of the 2-2 Ashes draw with a knee injury and side strain suffered during England’s victorious World Cup campaign.

“It is not predicted that Mark (Wood) will be available for selection for the earliest matches,” said England national selector Ed Smith.

“However, he will travel with the team and continue his rehab work with the medical staff on tour.

“There is no exact date given for his return, but the medical team is working towards him becoming fully available for selection during the tour.” Smith confirmed that off-spinner Moeen Ali remains unavailable after asking to take a break from Test cricket.

The opening match of the four-Test series starts on December 26 at Centurion. Uncapped seamer Saqib Mahmood missed out after being part of the squad in New Zealand. 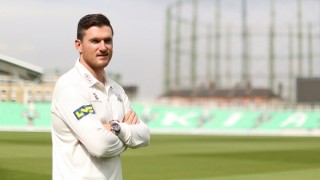