The Bangladesh Cricket Board(BCB) has taken serious action on Shabbir Rehman after he assaulted a fan during a first-class match in Rajshahi.

The Bangladesh Cricket Board (BCB) has taken serious action on Sabbir Rahman after he assaulted a fan during a First-Class match in Rajshahi. On Monday, BCB confirmed that Sabbir has been stripped of the national contract, fined TK. 20 lakh and even banned from domestic cricket for six months. BCB president Nazmul Hasan held a meeting with disciplinary committee vice-chairman Sheikh Sohel and BCB CEO Nizamuddin Chowdhury and made this decision. Sabbir apologised but failed to convince the BCB officials because of his previous disciplinary issues.

He is no more a centrally contracted player

“We had a discussion regarding Sabbir and our disciplinary committee members had taken a decision in this regard after completing the hearing and going through the report of the match referee,” said Nazmul. “They recommended that he be removed from the central contract along with a six-month ban and fine of TK. 20 Lakhs. He is no more a centrally contracted player. They also recommended that it is his last chance and if he fails next time he will be banned forever.”

It was during the second day of Rajshahi Division’s National Cricket League game against Dhaka Metropolis. Sabbir assaulted the fan for making noise that was directed towards him during innings break. According to reports, Sabbir took permission from the on-field umpire and confronted the fan behind the sight screen, leading to trouble.

The reserve umpire who noticed this reported it to the match referee, Showkatur Rahman. Sabbir behaved roughly with the referee during the investigation. Showkatur later reported the incident to BCB’s Cricket Operations Committee Chairman Akram Khan.

Sabbir had been involved in disciplinary issues earlier as well. He was penalised 30 per cent of his BPL contract money in 2016 for for breaking disciplinary code of conduct, entertaining a female guest at the team hotel. In the recent BPL, he was charged half his match fees and awarded three demerit points for misbehaving with an on-field umpire. 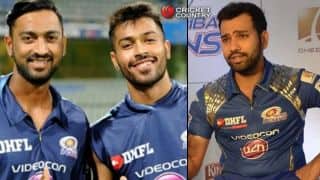