The '360 Modena Ferrari', which once occupied pride of place in batting icon Sachin Tendulkar's fleet of premium cars, is now a prized possession of a city businessman. 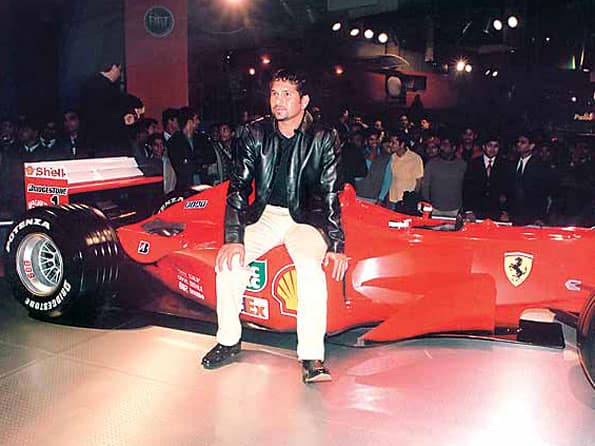 The ‘360 Modena Ferrari’, which once occupied pride of place in batting icon Sachin Tendulkar’s fleet of premium cars, is now a prized possession of a city businessman.

Jayesh Desai, Chairman of Raj Hans group, said he purchased the car a fortnight ago.

“I have bought the 360 Modena Ferrari car directly from Sachin Tendulkar with all legal documents,” Desai told PTI, but declined to reveal the price.

“It was my dream to drive a Ferrari and now my dream has come true,” Desai, who has a passion for driving luxury cars, said.

The Ferrari, which was presented to Tendulkar by racing legend Michael Schumacher, will be the first racing car in his fleet of luxury vehicles, Desai said, adding that his latest acquisition was a prized possession as it was owned by the batting great.

“Kindly ask me only about the car and nothing about Sachin,” he said when asked if he and Tendulkar were friends or had known each other.

The Ferrari had got mired in a controversy in 2003 after it was reported that Tendulkar had requested for a customs duty waiver despite getting it as a gift and not winning it as a prize in a tournament.

The car was gifted to him by FIAT, which manufactures the premium Ferrari cars and endorsed by Tendulkar, after the Indian batting legend equalled Don Bradman’s tally of 29 Test centuries.

Ferrari’s Formula One driver Schumacher presented the car on behalf of the company to Tendulkar when the two met in 2002 at Silverstone, England.

Tendulkar has taken a break from cricket after playing in IPL and is away on a vacation in England with family.