Indian Olympic Association have sent a draft to Sachin Tendulkar to which the batting legend is yet to respond.

After a contemplating decision on approaching Bollywood star Salman Khan as goodwill ambassador of Rio Olympics 2016, Indian Olympic Association (IOA) has approached former India legend Sachin Tendulkar for the the same, although there are no confirmations from Tendulkar going ahead with this approach. Tendulkar has always boosted Rio-bound athletes. He also played a key role in revoking boxer Sarita Devi’s suspension in Asian Games 2014. There are also reports suggesting AR Rahman being approached for the same, to give it a glam touch. With too many speculations, one can only wait until the final decision makes it way out. READ: Sachin Tendulkar reminisces time in life with no money to hire cab ride

Meanwhile, former India captain Sourav Ganguly came out in support of actor Salman Khan, who was also approached as goodwill ambassador for Olympics, for which Ganguly on Thursday mentioned, “I’m happy and fine with him [Salman] being the ambassador as he brings visibility and glamour quotient to anything. You cannot deny that Salman is popular and he would bring visibility to the Rio Olympics. He is an entertainer. I think it’s fine to have him appointed as the ambassador. I think they can have other ambassadors as well, it’s nowhere written that they can only have one ambassador.” READ: Sourav Ganguly sees nothing wrong in appointment of Salman Khan as ambassador of Rio Olympics 2016

As media awaits the response from ‘Master Blaster’, India’s cricket icon was recently found in the launch of ‘digibank’ an initiative by DBS Bank on Tuesday. During the launch, Tendulkar reminisced a peculiar moment from his life where he had no money to hire cab for 2km distance while he was playing for Under-15 cricket. The distance that had to be covered was from Dadar Station to Shivaji Park. 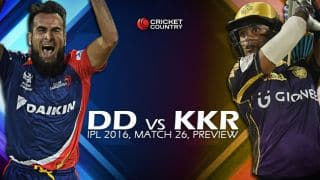