Recently-retired batting legend Sachin Tendulkar on Thursday became UNICEF's first brand ambassador for South Asia and is all set to work in promoting hygiene and sanitation in the region. 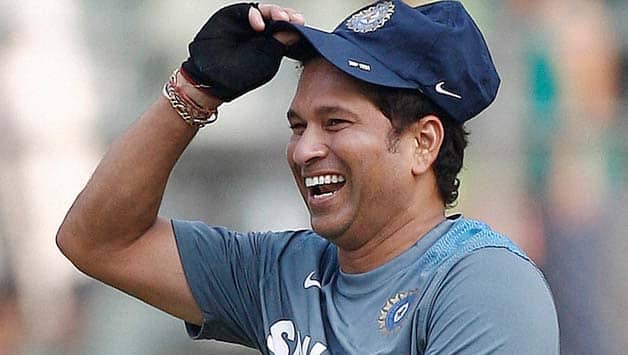 “Thanks for allowing me to start this wonderful second innings of my life. I’m looking forward to being an ambassador for UNICEF and serve to the best of my ability. This is an innings that is really really important to me, so I will try my best,” said Tendulkar.

The batting icon, who has been involved with the global organisation for the last 8-10 years, was on Thursday named its ambassador for South Asia region for two years.

Tendulkar said it was hard to digest that many people around the world did not have access to clean toilets.

“I was surprised to know that 36 per cent of the world population don’t have access to safe and clean toilets. In today’s day and age to think about this basic facility not being available to a common man, it is really difficult to digest,” he said.

“If a person defecates in the open and goes back home and that happens to be a mother, because in most of the family it is the mother who runs the house. She is the one who is cooking food for all the family members, she is the one who is feeding the baby with her own hands because that is the attachment and a bond that any mother and child would share.

And if the hands are not washed with soap, can you imagine the result. It can actually take away the child’s life. For an adult’s negligence, a child cannot lose its life,” he added.

The 40-year old said he was baffled by the statistics on the high number of children dying due to lack of proper hygiene.

“Also another statistics which baffles me and I was disheartened to know was that 1600 children die everyday because of diarrhoeal infected diseases. I just want to help UNICEF to make more people aware of this initiative that I am part of. It is as simple as washing your hands with soap,” he said.

Tendulkar said he would achieve something in his second innings if he was able to bring down the number of child mortality due to diarrhoea related diseases.

Recalling his childhood days, Tendulkar said there were times when he didn’t bother to wash his hands after playing.

“There was a stage where I would play downstairs with my friends, cricket with tennis ball, and occasionally didn’t bother washing my hands, and wanting to eat after coming back home. My mother made sure that I washed my hands properly and ate with clean hands,” he said.

Tendulkar, who was also earlier part of the UNICEF campaigns for polio and global hand washing, said, “Hand wash according to me with soap is like vaccine which can prevent a lot of diseases. Basically, by not washing your hands after defecation allows a person to carry germs back home. It causes lot of harm to your health. Many diseases like diarrhoea, dysentery, worms, infect many diseases related to respiratory are caused because of our negligence.”

The batting icon, who had interacted with kids for the hand wash campaign, said he was looking forward to meet more children through this new role.

“Not just I was part of spreading the message but also to spend time with children and educate them about hygiene; how important it is to lead life the way it is meant to be, is lot of fun and I thoroughly enjoyed doing that. I am looking forward to sharing such moments with a number of children.”

Tendulkar said it was important to pass on the correct information to the people and make them aware.

“I think it becomes our responsibility to pass on our knowledge. I have seen it at home, my wife being a doctor, most of the things I don’t need to worry about. If the children are not feeling well, I know my wife is going to give them the best of the treatment and make sure that everything is fine. But outside where certain people don’t have access to these things, I think it becomes our responsibility to share our thoughts with them, our knowledge with them and just make them understand how important it is.

“Not just for them but their family because it is infectious. If you don’t wash your hands regularly after using the toilet then the results are terrible. You don’t want to talk about those results,” explained Tendulkar.

He further added it was important to have sanitation for everyone, especially children.

“Let us make this effort in creating this awareness, spreading the right information to the ones who don’t have access to this information. I think it becomes our responsibility and it is all about creating a healthy and cleaner place that we live in. If we are able to do that there will be many happy faces around. Let us strive towards sanitation for all of us, more so important for children who don’t understand how important it is to wash your hands with soap,” he said.

According to UNICEF, almost half the population in India defecates in the open and 681 million people practice open defecation in South Asia.