Sachin Tendulkar explains why he did not retire from cricket immediately after India's ICC World Cup 2011 win.

Questioned as to why he didn’t retire from One-Day Internationals (ODIs) after the 2011 World Cup triumph, batting legend Sachin Tendulkar said that he wanted to retire from competitive cricket only once.

“Retirement  — I also wanted that to happen once in my life, to play my last game. I discussed at home and I said I just want to walk off the field once in my life and not do it every now and then so that people get confused, whether it was the ODI or Test retirement. I just wanted to do it once in life and I am glad it worked out the way I wanted it to.”

Was there any dilemma post World Cup triumph, Tendulkar answered, “I don’t think there was any dilemma of whether to continue or not. I just wanted to live that moment and not shift my focus from something I had waited for 21 years to somewhere else. I felt that I deserved to do more. And that stage, I just wanted to live in the present and enjoy being World champions, which I waited and worked for 21 years.

During his entire career, Tendulkar never got into war of words with any former cricketer. When former India coach Greg Chappell’s elder brother Ian called for his retirement, the legend decided to let his bat do the talking.

“I don’t think much about him [Ian]. I showed him the size of the mirror in the VB Series [in Australia] in 2007 [he got a hundred in the final], so I don’t need to go out and prove to anyone. He has got nothing do with Indian cricket and it was just another opinion. Sometimes, I feel people are given too much importance.

“The guy [Chappell], who was asking me to stand in front of the mirror, has possibly failed more times, so it is an opinion and I didn’t want to respond to that and fortunately by God’s grace my bat did that.

“But I did tell him [Ian] when I met him in Durban in 2010 when I was working out in gym and he said “this is the secret of your success” and I said “You have conveniently changed sides” and I have put that in my book. It is not that I am hiding it. Nitin Patel [Physio] was standing next to me when I told him that,” he said.

Asked whether he missed being part of the team now, Tendulkar said he was a contented man and happy with whatever he had achieved.

“I am not missing cricket. I am content with what I have done. I played the MCC versus Rest of World game this year at Lord’s and the next day my body [the way it responded] said, I had taken the right decision (to retire).

Tendulkar is one cricketer, who has seen generational shifts in Indian cricket and himself was a part of few. For him each and every phase was enjoyable while playing with younger crop of players.

“I have always treated all the members from that period like my younger brothers and I had told them that anything that they wanted they should knock the door even at 12 at the night. We can have a discussion on batting or bowling or whatever. I am more than happy to sit with you and spend as much time as possible.

“And it is not only them, but also a few other guys who were older than me. We have had good discussions and I have always believed that a good team will always have good friends and if you are good friends it reflects. And a good dressing room atmosphere reflects out on the field and that is what I believed in. And that is what we say when John [Wright] was there and Gary [Kirsten] was there”.

New Zealander Wright and Kirsten were national coaches in between the stint of Greg Chappell with South African Kirsten in the job when India won the World Cup three years ago.

Reflecting on the Barbados Test defeat in 1997, when India failed to chase the small target of 120 and collapsed for 81, Tendulkar ? who was the team captain – said he had cried alone in his room that night.

“It hurts. It is possibly one of those matches right at the top. I remember having sleepless nights. I cried, I didn’t cry in front of everyone. I did cry, it was just that outburst inside me and I let it go. It was really, really bad. I was shocked.”

On the ball tampering incident for which he was controversially penalized by match referee Mike Denness in South Africa, Tendulkar said he was just cleaning the seam of the ball by taking out dirt albeit without telling the umpire and said the incident taught him a lesson.

“I remember when we met after the game, somebody told me after the game that they had asked 7-8 guys to come and out of those my name was there. And it was for so called ball tampering, so I was shocked and I didn’t know how to respond to them because I don’t remember anything like that had happened. I also asked the umpires if they had found any change in the condition of the ball and the umpires said “no nothing at all” and they had not complained anything to the match referee”, he said.

“I went to the match referee and said that and told him that I was just cleaning the seam. And as we all know that it was a green-top we played on and I said I was just doing it. And he said I should have told the umpires and which I did. One thing I learnt from that for the rest of my cricketing career whenever I was cleaning the ball was to tell the umpires and the umpires would smile at me. So that was one lesson I learnt from it,” Tendulkar said.

Having come from a literary family, with his father late Professor Ramesh Tendulkar was also a respected Marathi poet, Tendulkar said that it was motivation enough to write a book.

About the motivation for writing the book, Tendulkar reflected that his late father was a literary person, who had written several books, and so too his brother.

“I come from a literary family background, my father wrote, my brothers wrote, my eldest brother wrote and then Ajit also wrote. I thought this is a good opportunity and for whatever I have been through in my life, I wouldn’t settle for anything else.

“I thoroughly enjoyed whatever has come in my life and I thank God for it. I just wanted to share that with everyone.

It is impossible to share each and everything that has happened in my life but whatever has happened as long as there has been a honest and a sincere effort in sharing my thoughts that is what matters. So I just wanted to Play it my Way.”

He stated that he wanted to wait for his retirement before writing the book as he did not want his concentration to waver earlier.

“All I have said is spoken the truth. And before this, I had an important job on hands to play well for India and focus on what I am supposed to do. I felt that by engaging myself into other things which are not going to contribute to me playing better cricket should not take up any energy. All my energy should be focused on the direction that it is meant to be and that was playing cricket and getting better at that.”

“It was a conscious effort not just by me but also my family members, to stay focussed on cricket and nothing else.

And I said once my cricket is done than maybe I would speak my mind and if I disagreed with something I could opine myself.”

Tendulkar said that he has tried to address as many issues as possible.  “Everything I have addressed. There are some funny incidents. There are some so called controversial things also.

There are also number of areas where I have expressed what was going through my mind, what was my preparation, what was the idea behind doing that, so I have sort of covered everything including my personal life which I thought was the difficult thing for me to write. But I have covered most of the areas.”

“I have been working on this for three years. I felt that all the effort that had been put was worth it when I saw the book being completed and everything that we wanted to select, we had selected it and I felt quite satisfied,” Tendulkar added.

Asked what was the toughest part of the book to reveal, he said,”I think to recall everything took me sometime, to gather my thoughts. I think the most difficult part to reveal was the relationship between Anjali and me. I have always kept that close to my heart and very few guys know about it – including my family and her family – they didn’t know. In a few months they got to know. So that was something that was close to my heart.

“My family has been my strength and in good times as well in bad times they have stood by me. In testing times, the family was with me and that is what you call your core strength,” he added. 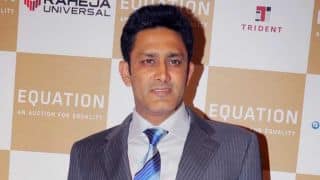 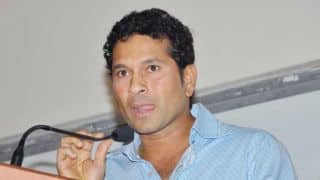