The furore in the late '90s had led to a life ban on former captain Mohammed Azharuddin.

Sachin Tendulkar has shied away from touching on perhaps the darkest phase in Indian cricket — the match-fixing scandal — in his much-awaited autobiography, saying he chose to skirt the issue as it would have been “unwise” to comment on things he was not fully aware of.

Speaking to a select group of journalists ahead of the worldwide launch of ‘Playing It My Way’ here, Tendulkar sought to clarify just why he chose not to write about the scandal during which he was a part of the Indian dressing room.

The furore in the late ’90s had led to a life ban on former captain Mohammed Azharuddin and bans of lesser severity on some others like Ajay Jadeja.

“I think whatever things I knew 100 per cent I have revealed because I back up those things. But the things I am not aware of fully, it would be unwise to comment on those,” Tendulkar said.

“I should have some evidence, I should know something in detail to talk about it because then it makes sense and it will be appreciated by people. But if I just start talking then it will not have any value,” he said.

Asked whether he felt that some players under-performed deliberately during that phase, Tendulkar chose to offer a straight bat.

“No, I mean the guys fail, but who doesn’t fail in life, everyone fails. It would be unfair to just pinpoint at someone and say that he was under-performing, didn’t try his best, I can’t. I have played the sport for 24 years and failures do happen,” he reasoned.

Another pointed question came on the perception that he never took a stand on major issues but Tendulkar said his book answers the issue.

“If you see in my book, issues on which people believed I should have taken a stand, the only things which I was 100 per cent sure of I stood for that in my book,” he said.

“If you have read some of the articles I have expressed myself whole-heartedly but on things which were not first-hand information, it is unwise to do that, it is (like) a loose statement and I didn’t want to fire loose statements,” he said.

Jadeja with his horse Ganga 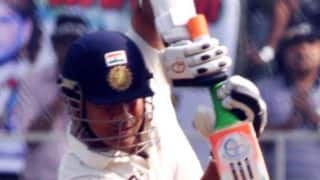 Sachin Tendulkar: Anjali was with me when Greg Chappell offered me Indian captaincy