Welcome to CricketCountry's coverage of the Mumbai Cricket Association's (MCA) felicitation ceremony. Sachin Tendulkar, the legendary batsman would be felicitated by the MCA in this function. Tendulkar retired from cricket last month leaving a huge fan base disappointed. The other attractions at this function would be Prithvi Shaw, the young boy who recently made headlines by scoring 546 in a Harris Shield game. Then, we would also have Musheer Khan, the eight-year-old cricketer who dazzled during the Kanga League. So, we would be bringing to you all the updates.

That’s the end of the MCA’s felicitation function in Mumbai.

20.10: Tendulkar says, “Apte sir, I remember the game at Shivaji Park. When we played, you seemed as enthusiastic as a youngster. Your fitness is an example for us. The club structure has helped Mumbai cricket become strong.

“IPL also has taken the game to the small corners of the country. MS Dhoni has come from a small town. I suggest to the MCA that in school games, can we allow 15 players. Many times when these boys go to play with hope, they may not know if they would. This is for those who are on the borderlines. Every player should get a minimum three matches. Till their players don’t stand up on their own, MCA should support. Quality of cricket would go up and selectors would see more talent. We should introduce something new and give each player the opportunity. It would help Mumbai. Some may say this is because Arjun is playing. There is nothing like that.”

“I know many players I know who didn’t get support from the family. Many left their homes but weren’t successful. So, we have to give them chances.”

“I am honoured to come here today. I wish the Ranji Trophy team well. If you do it in this testing time, I will come and celebrate with you.”

20.05: Tendulkar speaks now, “Firstly, many happy returns of the day to Achrekar sir. I also thank Pawar sir for marking this club. Cricket is like oxygen and I have practiced here a lot. When the staff felt that I had my last practice, they gave me an emotional sendoff. I will come back for small doses of oxygen. ”

20.00: The MCA office bearers are on stage. As Tendulkar comes on stage, the crowd gets up and Pawar presents him with a shawl. Anjali Tendulkar joins him on stage. He is given a huge memento and fireworks go in the air.

19:50: Madhav Apte announces that the Legend’s Club in Mumbai have decided to include Sachin Tendulkar as their next legend. The other four legends in their club are Sunil Gavaskar, Vinoo Mankad, Vijay Merchant and Vijay Hazare.

19:31: Madhav Apte will speak to the crowd. “Since the morning, I have been searching for words to describe him. He has exhausted all. I will speak about my personal experiences with him and not his cricket. I remember Dilip Kumar praising Lata Mangeshkar. He said, “Here art is like the rays of the sun and her singing is alike.” Sachin falls in that category. Only he knows how to play strokes etc and he has given us a lot of joy. I remember the first time, I saw him in the 1980s at Shivaji Park. I was playing against Shivaji Park Youngsters and he came to bat. Hemant Kenkre my teammate asked me to watch him. I then watched him bat and after all these years, I remember the 70 odd. It was an experience as such a young boy could play well. There wasn’t strokeplay alone, but also tactics. I was what I thought of him. I said, “Fellows, I have played in the city over 50 years. I have seen a lot of talent, but this is outstanding. If this boy keeps his head on his shoulder, he will play for India sooner or later.” And you have stayed like that.

“Raj Singh told me that we should make Sachin the playing member of CCI. But, those under the age of 18 were not allowed in the dressing room. I said, why not, let us get permission. We proposed it to the Committee and it was passed and he played for CCI for one or two years.”

“Sachin’s behaviour is better or his batting? That is the question. he has behaved so well. You have given us so much joy as a player. Keep going and we hope you keep doing it in some capacity.”

19:20: Tendulkar will be presenting awards to some young boys. Prthvi Shaw, the boy who scored 546 is now presented a memento by Tendulkar. The legendary batsman has a chat with him. Musheer Khan, the eight-year-pld now walks up on stage to collect his award from Tendulkar. The legend now poses with Musheer and Prithvi with his arms around them. Talk about dreams coming true.

Tendulkar also presents the Kanga League A Division Runners up Trophy to Karnataka Sporting Club. Payyade Clud were the winners and are presented with a huge MCA flag.

19:15: Sharad Pawar will now felicitate Achrekar. Tendulkar also joins him on stage. The whole crowd has stood up to applaud his contribution to cricket in the city. Of course, his biggest contribution is Tendulkar himself. Now, he is also cutting his birthday cake and Tendulkar feeds him after it is cut. Fireworks also go in the sky.

19:05: Ramakant Achrekar would now be honoured by the MCA. Ajit Wadekar, the former India captain will now address the crowd. He will talk about Achrekar. “The whole cricketing world knows what Sachin is and who has made him. It has to be Ramakant Achrekar, whom I was associated with for such a long, right since my days in Shivaji Park. We used to play a lot of cricket in Shivaji Park with Tennis Ball. If the team led by Ramakant was going to our opposition, we used to get really frightened, To be frank, he was called the “Don Bradman” when it comes to tennis ball cricket. Then, my association with him went further when I joined State Bank. He had retired by then. He aspired to play for Mumbai as wicket-keeper. But, he couldn’t pass through the supremacy of Naren Tamhane, Chandu Patankar etc. Of course, Mumbai missed someone there. I didn;t play with him, but was lucky to get guidance from him. He started coaching and took it very seriously. If I had an inkling then that he would produce a Bharat Ratna. There are many other cricketers as well. I would have asked him to make me his assistant. Ramakant many many happy returns of the day. May you live long, so that you can produce another Sachin-like player. To be frank, if Sachin didn’t have a brother called Ajit and if he had not taken him to Ramakant, I don’t know what would have happened to him.”

“What can I talk about Sachin? Everyone knows what kind of a legend he is. My four and a half years as coach (of the Indian team) was memorable. I found him superlatively confident. It so happened that we were playing at Kolkata in the Hero Cup semi-final against South Africa. We had decided that Kapil would bowl the last over, if it goes there. South Africa needed six runs and two wickets were there. Kapil developed a stiff arm. Azhar did not what to do and he looked at me for my tip. By the time, I could react, Sachin snatched the ball from Azhar and asked him to put a field. And, we won the game! Such is Sachin!”

“Same thing happened in New Zealand in Auckland. Just 20 minutes before the toss, Navjot Singh Sidhu came and said he won’t be able to play. I was taken aback as to who would open. I looked at Sachin and he said, “Sir, can I open?” I had no choice, but I felt, “Your wicket is valuable, but if you go down it would be ideal.” But, the way he hammered the Kiwi bowlers, you should have been there to believe. And since then he opened in ODIs.”

“Sachin is a prankster too and played them on people who know him. He knows his jokes and is witty. He is such a loving person. I hope there are more cricketers like that who keep the Indian flag flying high. Thank You Bharat Ratna Sachin Tendulkar.”

19:00: F Division winners Ghatkopar Jolly Gymkhana. Runners up are . They are felicitated by Bapu Nadkarni.

Vinod Deshpande, the MCA treasurers and Balvinder Singh Sandhu will now present awards to the E Division winners. Bhatnagar Sports and Culture Foundation are the winners of this division. The Runners-up are Vijay Cricket Club.

The D division winners would be felicitated by PV Shetty and Praveen Amre. Winners are Young Men’s Cricket Club. Wellington Cricket Club are the runners-up.

18:50: Tendulkar is invited on stage and he is joined by the office bearers of the Mumbai Cricket Association. He inaugurates the Sharad Pawar Indoor Academy and Recreation Centre. Now the winners of the Kanga League. The G Division winners New Amrit Cricket Blub come up to collect the trophy. Abey Kuruvilla and Nilesh Kulkarni present the trophy to the winners. New Canara Cricket Club are the runners up.

18:40: Ravi Sawant addresses the crowd now as he delivers his welcome address. Today is Ramakant Achrekar’s 81st birthday and Sawant wishes him a very happy birthday. It is quite apt that Tendulkar is being felicitated today. Sawant now reads out quotes on Tendulkar. He says, “Brian Lara said he wants his son to play like Sachin, but I ask him, “Where would you find Achrekar sir?

Welcome to CricketCountry’s coverage of the Mumbai Cricket Association’s (MCA) felicitation ceremony. Sachin Tendulkar, the legendary batsman would be felicitated by the MCA in this function. Tendulkar retired from cricket last month leaving a huge fan base disappointed. The other attractions at this function would be Prithvi Shaw, the young boy who recently made headlines by scoring 546 in a Harris Shield game. Then, we would also have Musheer Khan, the eight-year-old cricketer who dazzled during the Kanga League. So, we would be bringing to you all the updates.

Sachin Tendulkar arrives here to a standing ovation from the crowd. 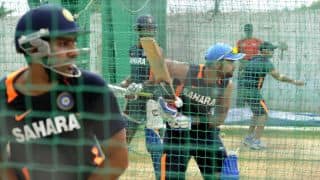 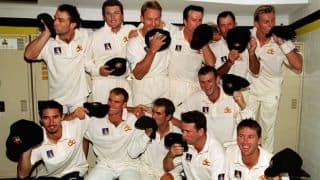