Badminton player Saina Nehwal on Sunday received a brand new BMW car for winning a bronze medal at the London Olympics from none other than batting legend Sachin Tendulkar, who said that the world is yet to see the best of the star shuttler. 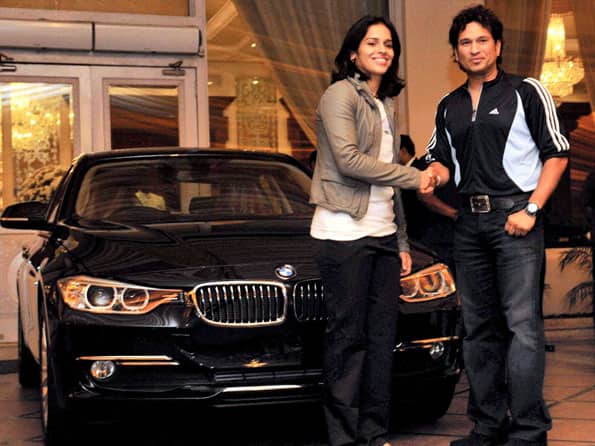 While announcing a BMW car for Saina Nehwal, Sachin Tendulkar said he was confident that the Indian shuttler’s best is yet to come PTI

Badminton player Saina Nehwal on Sunday received a brand new BMW car for winning a bronze medal at the London Olympics from none other than batting legend Sachin Tendulkar, who said that the world is yet to see the best of the star shuttler.

The felicitation function was organised by Vice President of Andhra Badminton Association Chamundeshwari Nath, who honoured the city girl by buying her the luxurious car.

“I am sure that she (Saina) is happy but not satisfied.

We are also not satisfied because we know that you can go to greater heights. You have that ability with Gopi’s guidance.

There are better days ahead and as a sportsperson, you always try to believe that your best is yet to come,” the iconic Indian batsman said at the felicitation function.

While announcing a BMW car for Saina and a car each for her coach P Gopichand and budding talent P V Sindhu, Sachin said, “I am quite confident that your best is yet to come and you will emerge victorious across the world and that is what we want”.

Heaping praises on Saina, Tendulkar said, “Whatever I have seen of her there is no drama involved, it’s just quality badminton and that is what you expect from a sportsperson.

After winning (bronze medal) also, she has not got carried away and that’s the beauty of being a champion sport person”.

Saina gave India it s first-ever medal in badminton at Olympics when her Chinese opponent withdrew from the bronze medal play-off after injuring her knee.

“This medal means a lot for India, I am sure this medal has not come without dedication, hard work, focus and having a vision,” Tendulkar said.

Congratulating all the medal winners, he said it was “terrific” for India at London. “You all deserve praise and good things that are coming your way,” he added.

Responding to the accolade, Saina said she had waited for her Olympic moment since her childhood days.

“I dreamt of being a Olympic champion at the age of 9…It is unbelievable to have won the medal. I am so happy. I should thank Gopi sir for making it possible. He really worked hard with me for many years.

“Myself winning the first medal will really change a lot of things for badminton in India and I am sure we shall have lot more medals in future. I hope badminton becomes one of the most popular games, though may not be like cricket, in our country,” Saina said. (PTI)