Tendulkar should also work for common man as a Parliamentarian: Gavaskar

Tendulkar should also work for common man as a Parliamentarian: Gavaskar

Sachin Tendulkar should not restrict himself to just highlighting issues concerning sports during his new innings in the Indian Parliament but should also work for causes related to the common man, former captain Sunil Gavaskar said. 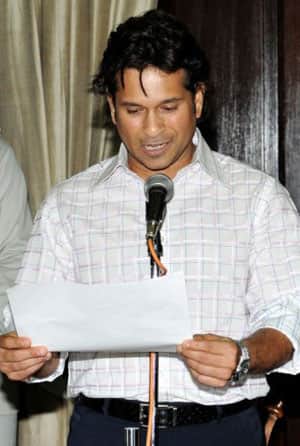 Sachin Tendulkar should not restrict himself to just highlighting issues concerning sports during his new innings in the Indian Parliament but should also work for causes related to the common man, former captain Sunil Gavaskar said.

Tendulkar today took oath as a member of the Rajya Sabha and said that he would work for all sports and not just cricket during his tenure in the upper House of Parliament.

However, Gavaskar said, Tendulkar should utilise the big platform to raise issues which are not just confined to the world of sports.

“I think, in my view he should not limit himself to just sports. It is a tremendous opportunity, tremendous platform to express on all matters what he and his generation thinks, should be done to take the nation forward,” Gavaskar said.

“How he looks upon this, it up to him. But as I said, it is a tremendous platform, if he can use it to help India grow as a nation, that would be terrific,” the batting great said.

Suggesting how Tendulkar should approach his new innings, the former Test opener said initially he could start by raising issues concerning sports and later expand his role.

“If you have people with integrity and credibility that Sachin has, his joining public life is good for country. I hope Sachin plays his innings in Rajya Sabha, like he plays in Test match, starting with V and later expand shots.

“He can start with looking at sports angles and expand himself and then take it beyond sports, what is connected with the common man and what makes common man happier. When Sachin talks everybody listen. That’s a responsibility, and he has the capability to do it,” Gavaskar told NDTV.

Gavaskar was sure that Tendulkar’s nomination has nothing to do with politics.

“As he clarified he did not go to any party, he was nominated for his outstanding achievements in the field of cricket. I don’t think he should be too much into anything other than that,” he said. (PTI)