India lifted a record fourth U-19 World Cup trophy after an 8-wicket rout of Australia in the final.

Kolkata: Sachin Tendulkar said the triumphant Indian U-19 side stood out from the rest of their competitors in the just-concluded World Cup.“The way they have prepared themselves, physically, mentally, their planning and the execution was on top. That’s why it was evident that the Indian team stood out from the rest of the competitors,” Tendulkar said, after flagging off the Kolkata Full Marathon on Sunday morning. India lifted a record fourth Under-19 World Cup trophy after an eight-wicket rout of Australia in the final yesterday in New Zealand.

India had all their bases covered with the bowlers’ bouncing back to dismiss Australia for 216 from 183 for 4 in the 40th over. The highly-rated batting completed the job with conviction as India chased down the modest target in 38.5 overs.”It’s been a tremendous achievement that requires a great team work to realise big dreams. We have been able to do that,” Tendulkar said. He also heaped praise on the BCCI for providing the right kind of infrastructure to nurture the players.

“Credit to BCCI for giving them the infrastructure. In the last 15 years, playing has changed, standard of fielding has changed. It’s all because of better infrastructure and ground maintenance. It reflects on the field.” Tendulkar also lauded the contribution of chief coach Rahul Dravid and the other members of support staff. “Without any doubt, it’s a terrific contribution. It’s working for him (Dravid) along with the support staff, he (Dravid) himself said that. It’s been a joy to work with that.”Rahul, (coach) Paras (Mhambrey) and (fielding coach) Abhay (Sharma) have also been a part of it. A big achievement for all of them,” he said.

Meanwhile, while addressing an event organised by Kolkata police, Tendulkar said that he had always felt secure while playing matches here.”We always felt secure coming to Kolkata and playing cricket. I have got some amazing memories, all those things were possible because you took care of the crowd and made us feel secure,” he said in his address at the Kolkata Police Sports 2017-18 at Alipore Bodyguard Lines.”It’s a bit like driving. The driver feels secure but safe driving is actually when the passenger feels safe. Here Kolkata Police are the drivers and we are the passengers. So we feel safe and secure when you are around.”

He said sports teaches one a lot of things which cannot be learnt in a boardroom or a classroom.”In 24-plus years that I have played cricket, it taught me a lot. Not always did I win, there were occasions when I lost. Cricket taught me to get back on my feet again and compete in the fairest possible manner. So here I would expect all of you to compete hard but to compete fair. It is a special feeling when you see women power there. I want to wish you all the very best,” he said.

Sharing the dais with legendary footballer PK Banerjee, Tendulkar said: “It’s truly an honour for me. He’s someone who has inspired many many generations to take up sport and do something special. If we had not had such heroes, things would not have been the same.” He also talked about the need for women’s empowerment in this country.

“As far as as women power is concerned, I think they are the backbone of India. I still remember as a child when I would come back home, one would expect your mother to be doing everything possible for you. We take all these things for granted. For women, to be able to take care of their house and also do their job is credible,” he said. 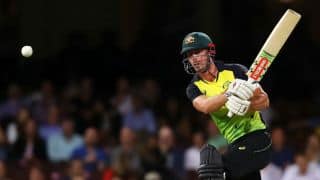 Chris Lynn: Number one priority is playing for Australia