Sachin Tendulkar launched the anthem and jersey of his co-owned football team Kerala Blasters, for upcoming India Super League (ISL), which is slated to kick-off next month.

The ISL was officially launched in Mumbai, on August 28, by billionaire, in which eight franchises will take part.

While unveiling his team jersey in Kerala, Tendulkar said yellow represents faith, adding that the league will bring sporting culture in India, especially at the grass root level.

“The idea behind yellow jersey was yellow stands for determination and faith. Determination by Kerala Blasters on the field to go and perform to the best of their ability and faith for all the well wishers of Kerala Blasters, to have faith in the team that they will go out and play in the right spirit,” said Tendulkar.

A total of 49 foreign players were drafted during the session for the league, which is slated to run from October 12 to December 20. Seven players have been directly recruited by the teams.

“I am really really happy to bring different cultures together, not just within India but also from various parts of the world,” Tendulkar added.

Though the ISL has managed to attract some big-name overseas signings and grabbed eyeballs, opinion remains divided if it can help lift the standard of football in the country which already has an existing national football league (I-League). 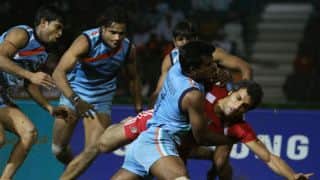