While delivering a lecture on leadership at an All India Management Association function in New Delhi, Imran said facing the likes of Andy Roberts, Michael Holding, Joel Garner, Malcolm Marshall and Colin Croft was a huge task.

In fact, Imran pointed out that some fine talent was forced to be on the bench because the frontliners were irreplaceable.

“There was Sylvester Clark, who used to be on the bench mostly, but on a rebel tour of South Africa, he demolished the opposition single-handedly,” Imran said.

“My friend, the poor guy, Sunny Gavaskar bore the brunt of the West Indian fast-bowling attack. Sachin is very lucky that he didn’t face them,” he added.

Tendulkar retired recently after playing international cricket for nearly a quarter of century, notching up most of the batting records to be rated as the greatest of modern era. 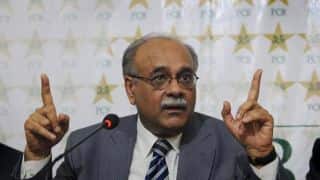